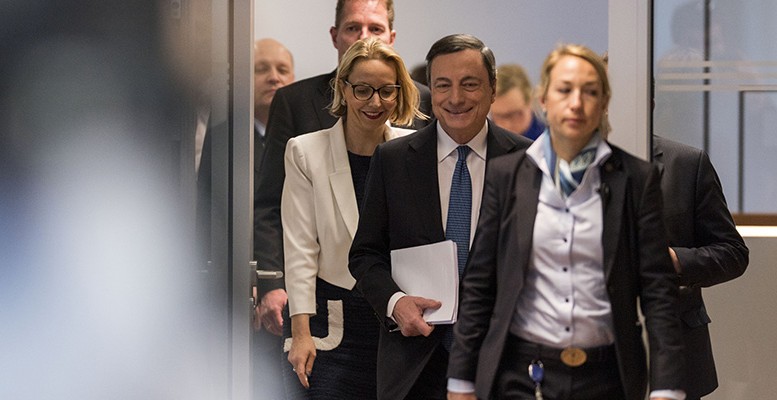 In last years, central banks have managed to give markets any sign about the direction of their policies, neither too dramatic nor excessively inaccurate. Today it is the turn for the ECB to take a further step towards the monetary policy easing in Europe. Experts are divided over the tone of Draghi’s words at the central bank meeting. Some expect he will not change it against the relative surprising hawkish speech in Sintra two weeks ago.

Analysts from BoAML expect the ECB to toughen their language marginally, by removing the easing bias on QE, while insisting on the need for prudence and a persistent monetary stimulus.

“Sintra was not just about sending a hawkish message. It was also about expressing a healthy degree of unease at the pace of inflation normalisation and hinting that the end of QE did not mean fast normalisation in policy rates”

Meanwhile, in opinion of Julius Baer’s experts, despite continued positive news flow, the ECB is in no hurry to announce the end of quantitative easing (QE), let alone to hike rates.

“Market expectations have been low, as political uncertainty smouldered in the first half of the year, overshadowing the fact that economic data surprised quite positively. As political obstacles were removed with a pro-European outcome to the French elections, market perception has swung completely the other way. Capital inflows into the eurozone are pouring in and equity markets keep on rallying.

At the same time, speculation that the ECB could pull back its asset-purchase programme rather earlier has been growing strongly. However, market reaction just seems to be overdone.

While experts at Julius Baer acknowledge the very positive economic momentum, which even exceeds the dynamics in the US, it is much too early for the ECB to pull back its stimulus, and expect the ECB to be extremely dovish in tone at its meeting on Thursday.

“Slack in the labour market and a still sizeable output gap keeps inflation pressure muted. Today’s June estimates, with annual inflation of consumer prices at 1.3% and core inflation at 1.1%, clearly show that the ECB is in no hurry to pull back, and should rather continue its asset purchasing programme beyond the current time frame of December 2017. Moreover, the rise in bond yields and the EUR are constraining monetary conditions already.”

Finally, for Deutsche Bank’s experts the need for clarity is more urgent having opened a conversation on exit.

The more that Draghi’s new “confidence, persistence, prudence” mantra makes it into the press statement as opposed to the Q&A, the more confident the market will be about the Council converging to Draghi’s more constructive view.

Therefore, conditional on orderly markets, they expect Draghi to open the door to a September decision without pre-commitment, for example, by tasking the committees to study the policy options.