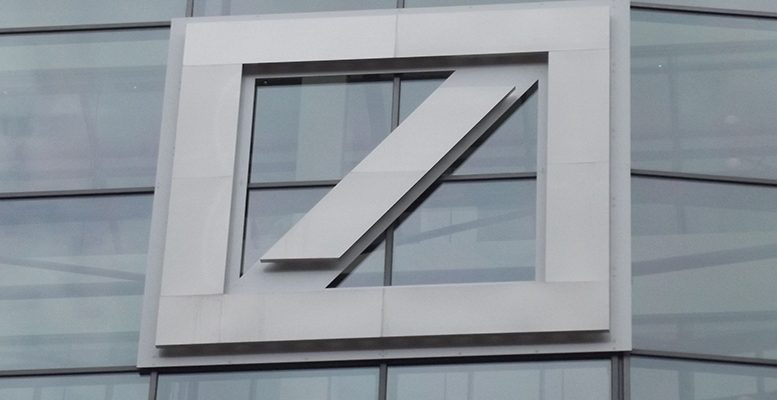 Deutsche Bank shares fell 6.21% on Friday, after the bank unveiled weak Q4 figures and a third consecutive year of losses. Germany’s biggest bank reported net losses of 497 million euros in 2017, following losses of 1.35 billion in 2016 and 6.77 billion in 2015. So it was its third consecutive year “in the red”, hit by the negative impact of the tax reform in the US, which deducted 1.4 billion euros from results.
Alphavalue analysts have once again lowered their estimates, recommendation and target price. At a quarterly level, net revenues were close to 5.71 billion euros. Breaking down by divisions, revenues from sales & trading, 886 million euros, and debt trading, 554 million, stand out.
As far as solvency is concerned, the CET1 ratio stood at 14%. For 2018, the bank estimates restructuring costs similar to those of 2017. “We can only repeat what we have been saying for years,” says Alphavalue.

Deutsche Bank has been restructuring since 2012 and has caused a net attributable loss in the share price of 9.5 billion euros between 2015 and 2017, despite the economic growth in its domestic market, Germany, over the same period. This is ridiculous. The lender has a problem of revenues and costs as a result of its focus on global investment banking. But this is nothing new, since it has been going on since 2012.

Although the bank’s CEO John Cryan said he “firmly believes” that it is on the path towards growth and obtaining bigger returns with sustained discipline in terms of costs and risks, it’s true that Deutsche Bank’s problem is not just its management. Its strategy has failed, as Alphavalue’s experts explain:

The CEO has yet to show that he has some idea about how to resolve the problems. Deutsche simply replaced an investment banker with burdens by one without any. We have it quite clear that Deutsche needs a new convincing strategy, the cultural change which was promised and a different board of directors and supervisory committee.