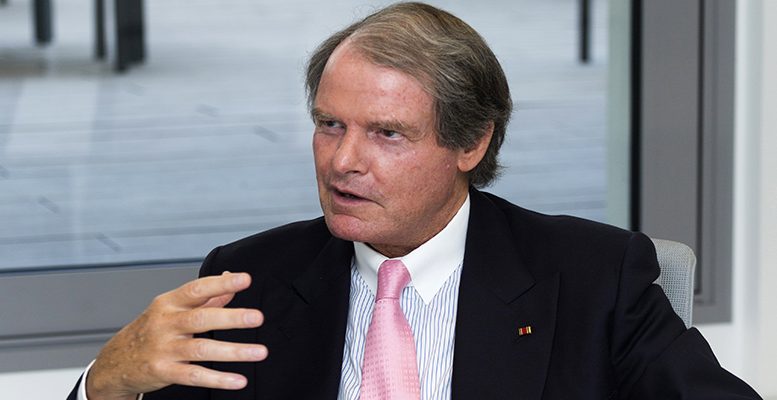 Fernando Barciela | “We need to reach a consensus. The Education Minister, Íñigo Méndez de Vigo, wants to get things done. But, of course, it’s not easy”, explains Francisco Belil, a Gas Natural board member and deputy chairman in Spain of the Bertelsmann Foundation. “Given the current situation in Congress, we need to be able to advance with important reforms, unilaterally agreed on, which remain in place over time. The study of maths, physics…this should not be political issue.”

Q: Why does the Bertelsmann Foundation have so much interest in promoting Dual Profesional Formation in Spain?

A: In Bertelsmann Stiftung, our German parent company, we touch on a lot of issues, but in Spain we decided to focus on just two: the dual PF and orientate young people so that they can choose a career which society needs and is in line with what they want. Because what’s been happening in the last few years is that they choose a career not based on what society needs, but on what they have seen someone doing and decide they want to do that as well. They see cooks on the television and want to become a cook. The problem here is that no-one has asked, for example, how many philologists or political scientists Spain needs.

Q: And does this not happen in other countries?

A: No. Those countries with which have more of a tradition in professional guidelines try to bring supply and demand closer. It’s not that they force anyone to study one thing or the other. If a young person wants to be an architect, we will try to facilitate everything for that to happen. But we let them know that at the moment there are too many architects, particularly because construction does not account for 16% of GDP as it did before. And if he knows he is going to have problems in finding a job in Spain, maybe he will re-orientate his expectations in a similar direction, perhaps towards interior design. If we were able to organise it so that young people could choose their profession within their innate skills and desires, but in tune with social needs, unemployment would drop a lot.

Q: What you are telling me is obvious. In fact we have been talking about this for decades. There are orientation services in the universities, the National Employment Bureau, and there are institutions like Business University Foundation…So where is the problem?

A: Basically we haven’t made profesional orientation a priority. Traditionally, businesses and education have not collaborated sufficiently. A lot of very good efforts are being made. But I have worked in 20 countries and have noticed that in other places they have a better solution for this issue. There are countries where companies collaborate closely and permanently with the universities. The question is that the company needs to express its future needs in the medium and long-term and transmit them to the education system. At the same time, the education system has to contribute and help these young people to get a job tomorrow. If this is not perfectly in sync, like a watch, it doesn’t work.

Q: Education is very much about ideology and the last thing teachers think about is that studies should match up with what businesses need and that young people find a job.

A: To a great extent you are right here. Since democracy arrived in Spain, we have witnessed more changes to the education laws than in any other neighbouring country. This situation doesn’t make sense precisely because education is the basis for any country’s future. And in our country, given that we have no natural resources, we have no option but to put all our support behind our young people’s talent. This means we have to train them appropriately, something which obviously has not been done here.

Q: Has there been progress made in aligning what the universities offer with what companies need?

A: There have been a few partial successes. Something which is also difficult to understand because there is no doubt we have a problem. We need to implement in-depth reforms: that said, to do that we don’t need to reinvent the wheel because it’s already invented and has been successfully applied in other countries. We just have to adapt those models, which are already working, in Spain, with some small adjustments.

Q: Would you say that education in Spain has a lot of deficiencies?

A: What we find surprising is, for example, that a country amongst the top 15 in terms of economic potential and with business schools which are amongst the world leaders, only has two universities amongst the top 200. This is inexplicable and unacceptable. We need to see what’s going on. If our future potential depends on our young people’s education, why are the business schools able to respond to what society wants and the universities aren’t?

Q: Are Spain’s young people worse educated than in the rest of Europe?

A: In some aspects yes, and in others, no. The thing is that here there is another phenomenon: in each autonomous region we have different education systems, which doesn’t make it easy. We need some minimal levels in place at a national level and then each region can add to that, put their own icing on the cake. Companies are increasingly more global and we can’t be on hold waiting to see what each autonomous community wants. And then there is another problem, namely that the level of mobility in Spain is very low, much more so than in other countries.

Q: I have read that there are a lot of jobs which have not been filled because people are resistant to move away from home.

A: Indeed. In my opinion, there are things happening here which are dramatic and difficult to explain. At the moment, there are 60,000 jobs in Spain which have not been filled. But with 60,000 people in other autonomous regions who could take up these jobs. This lack of flexibility in terms of moving house needs to be changed. The programme for young people in place in Princesa de Girona is an incentive for mobility. When a young person moves to another place he doesn’t just increase his knowledge, but also has a lot of experiences. If he goes to Galicia he sees how people live there. He will have to look for somewhere to live. In short, he learns more than he would do if he stays in his own town.