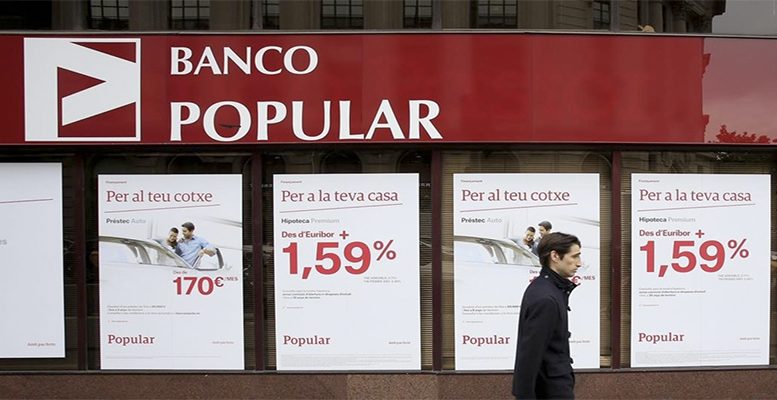 “New management: a new era. We are raising our stance to Buy with a target price of 1,30 euros per share.” This is how Citi’s analysts received the news that Emilio Saracho is scheduled to become Banco Popular chairman at end-February. The share price continues to pick up, although overall people are waiting to see what the new chairman’s initiatives will be.

“Since the new chairman’s appointment was announced, Banco Popular’s stock price has performed positively, a trend which has continued into 2017. It has risen 6.3% since the start of the year and is the financial stock with the biggest advance in the market,” says Javier Bernat, analyst at GVC Beka Finance.

Much is expected from Saracho both as far as direct management of the bank and improving corporate governance is concerned. Especially valued is his reputation with institutional investors, in terms of being able to raise more capital as well as leading an eventual corporate move which finally ends Popular’s independent status. This is the view of Norbolsa banking analyst Nagore Díez: “the stock’s recent rally was down to Angel Ron’s resignation as chairman and the start of a period of analysis of the bank’s future, which could include being integrated into another financial group.” Díez adds “we should remember that Ron was the main defender of independence. A priori, we are betting on a continuation of the strategic plan announced under his leadership, which is very demanding.”

In this respect, and even without knowing what Saracho will do, Bernat believes the first effect of his arrival in the job is “reputational”. On the other hand, his experience in capital markets and investment banking should help offload the pressure on managing the balance sheet and obtaining wholesale funding – amongst other things, the asset segregation operation. “So there is greater visibility in the implementation of the strategic plan and in the day-to-day manangement, due to the fact that it will not completely fall on the CEO at a time when problems are accumulating.”

For the time being, analysts are speculating about what the new chairman should do with the bank. Rodrigo García, analyst at XTB, is also pro-Saracho, although he does flag some uncertainties: “We don’t know what ideas and changes he has in mind for the market. From our point of view, the main thing for Banco Popular is to once again make it a viable business and that its financial profitability provides shareholders with an interesting return again. For that to happen, it’s likely that measures will have to be implemented which will be prejudicial in the short-term for shareholders, creditors and employees”.

Citi analysts have given Saracho some very clear tasks to carry out and give the impression they will welcome him “…if he does the following: 1) confirms the bank’s problem assets are adequately covered and, if not, raise capital by 3 billion euros, according to our estimates; 2) completes the segregation of the lion’s share of 6 billion euros of impaired assets; 3) accelerates the pace of revenues from the commercial network; 4)completes the cost savings programme (branches, staff, processes) and 5) continues to strengthen corporate governance”.

Saracho is a deacon of coporate banking in Spain, who was born at the beginning of the 1990s. He spearheaded the sale of Endesa at an unimaginable price, many times higher than the best market estimate at the time. He is also said to be the ideal person to lead an operation to sell the bank. Citi has also done its figures looking at the posible buyers for Popular amongst the other Spanish banks, who would have to offer Popular’s shareholders a premium of around “20%-30%”. “We believe that BBVA, Santander, Caixabank and Bankia could extract costs and find synergies with Popular“, Citi says in its report. And which of those banks would stand to gain more? “BBVA would diversify beyond mortgages to loans for SMEs; Santander could obtain bigger synergies, in theory, since it is Popular’s main competitor in SME lending; Caixabank and Bankia could obtain much-needed diversification.”

In any envent, analysts are realistic ahead of the top management change. Rodrigo García, at XTB, considers that “the change of key people in the company, even though they are the most relevant in the organisation, will take effect in the medium-term. The short-term upside we have seen in the stock price is due to speculation rather than purely economic factors.”

Bernat thinks the same: “There won’t be a clearer longer term view until the second half of 2017. In this period we should not be surprised to see Banco Popular possibly losing market share as happened with Bankia. But then it will once again become one of the banks withe highest ROE ratio and high solvency levels. That said, what Bankia obtained with a bail-out in a relatively short space of time, Popular would do in the medium/long term”

The latest Market Consensus –  from the Consejeros Group–, from a score of broking companies, established a target price of 1,58 euros per share at December 31 2016, although the stock has continued to rise since that date.

On the outlook for the share price, the technical analysis of Carlos Jaureguizar, at  Noesis B2B Fintech on the “Saracho effect” is interesting:

Falls from 0,76 euros: the change is not credible

Jaureguizara also believes  “things happen for a reason, macroeconomic, management, results, and the price reflects this ” as far as can” but it does reflect it.”