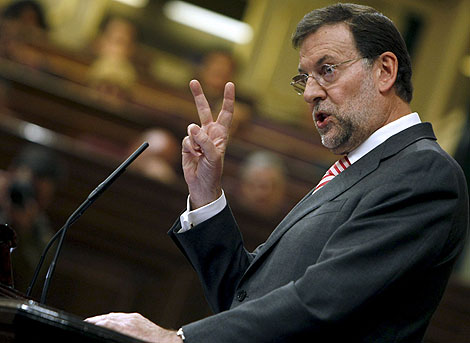 By Tania Suárez, in Madrid | The president of the Spanish government Mariano Rajoy had a purpose this morning. He wanted to make a decisive move, not just a simple declaration of intentions. He wanted to get out of his hideout to take the reins of Spain. And he has done it.

During a speech in a plenary session of the Congress this morning, Rajoy has assumed the cost of the crisis and announced the package of measures that will be implemented. The whole amount of measures are aimed at saving €65 billion within 2 years and a half, and represent a step forward towards the fulfilment of Spain’s commitment with Brussels.

The Spanish president has suspended the second extra pay, not only for civil servants and public employees, but also for top management, deputies and senators. In the specific case of public employees, they will be compensated in 2015 by a generous pension plan.

In that sense, Rajoy said,

As expected, there will be an important rise in VAT on an immediate basis. The general rate goes up from the current 18% to 21%, and the reduced rate goes from 8 to 10%. However, the government has decided not to modify the super-reduced rate, which remains at 4%. This measure will be endorsed by the cabinet next Friday July 13.

4- Other cuts and measures

Rajoy has announced cuts in social contributions (one point in 2013, and another one in 2014); and also the abolition of the deduction in personal income tax for buying a primary residence. The government will abolish many hiring incentives, except those concerning new entrepreneurs’ contracts.

In the tax field, there will be new environmental taxes and a rise in special taxes such as tobacco. The Spanish government will also cut the ministers’ budget in €600 million, and the general State budget for 2013 will undertake a 20% cutback in grants for political parties, unions and business organisations.