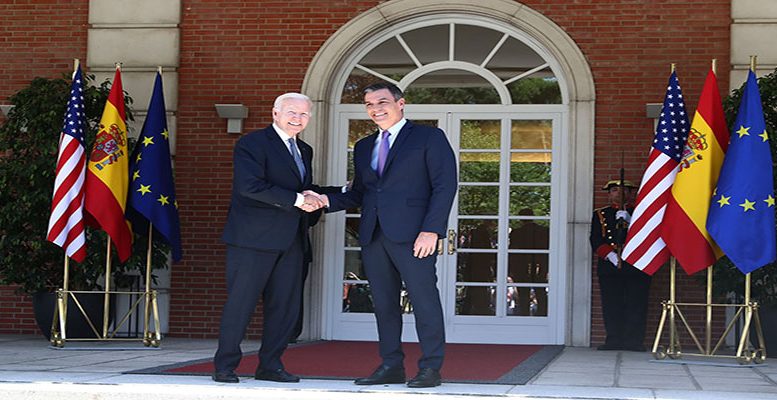 The war in Ukraine has changed everything. So has the relationship between Spain and the United States. The ‘Rota Pact’ has been key for Biden to speak of Sánchez now as a “friend” and for the two to exchange confidences. But it has not been easy to make concrete. Months, even years, of work have been done behind the scenes on this 180-degree turn in Spain’s relationship with the United States.

As the daily La información.com explains, “In Moncloa they make no secret of their satisfaction. From withdrawing the frigate Méndez Núñez from the US Navy battle group in 2019 to accepting that two more destroyers, up to six, based in Rota, which will also mean the landing of some 600 more marines. Madrid and Washington are now “strategic partners”. To achieve this, Pedro Sánchez has had to accept an important military concession and in exchange has managed to get Joe Biden to describe Spain as an “indispensable ally”. Spain had been cooling its heels on the decision to expand the US military presence for several years, and now Moncloa hopes that this will be reflected in counterparts, especially in the economic sphere.

Sánchez had not committed to the expansion of the naval base located in Andalusia since 2019; he first refused to do so to the Trump administration and later took more than two years to make it concrete with the Biden administration. In the months leading up to the 2020 presidential election, Trump’s then Secretary of State for Defence, Mark T. Esper, sent a letter to Margarita Robles expressing his interest in hosting two new strategic ships at the Andalusian naval arsenal. But the Spanish government’s decision was to keep this decision on ‘stand by’… until yesterday. The military cooperation agreement will have to be extended (it is automatically extended year by year) and the government will have to endorse the decision in Congress. Presumably the PP will support it.

Point 13 (of the 18 points included) of the agreement signed this Tuesday in Moncloa between Sánchez and Biden is the key: “Spain and the US commit to strengthen the rules-based multilateral trading system to ensure fair competition and legal certainty”. This is a clear reference to one of the main problems during the Trump administration: tariffs. Spanish exporters, especially olive oil exporters, encountered serious inconveniences when the former president decided to raise these quotas on foreign products. With yesterday’s agreement, this spectre has receded.

Cooperation will also be strengthened in the fight against irregular immigration from North Africa, which is key to the economy of the autonomous cities of Ceuta and Melilla and which has caused a blur for the government in the week of the NATO summit. An executive branch source points out that the turnaround with Morocco is beginning to crystallise with these decisions”.