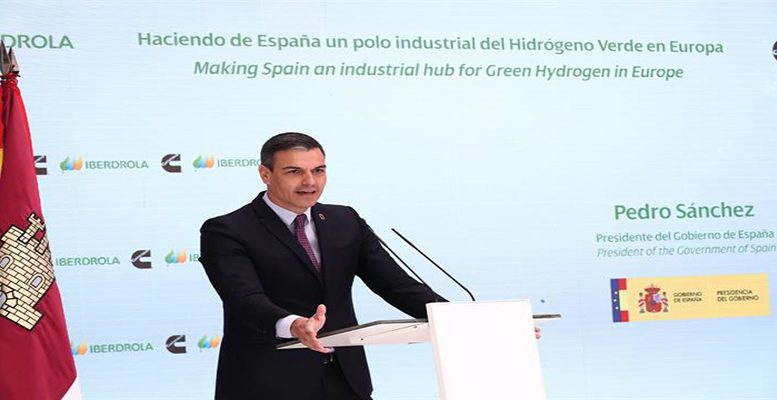 The President of the Government of Spain, Pedro Sánchez, took part in the presentation for the business project that will, this year, begin constructing a giant factory in Guadalajara. The project – led by Iberdrola and Cummins- with an initial investment of 50 million euros, will create 350 jobs and aims to enable the Guadalajara factory to start series production of renewable hydrogen in 2023, with a capacity of 500 MW/year. Every kg of green H2 that replaces a fossil one will avoid 9 kg of CO2 in the atmosphere.

Renewable hydrogen is a key element in decarbonisation and a complementary energy vector for the electrification process, particularly in sectors that are difficult to electrify, such as heat production, heavy transport, maritime, rail and aviation. According to various estimates, hydrogen will expand strongly until 2030, and by 2050 it will account for one third of the fuel used in land transport, rising to 60% in maritime transport. In this respect, the effect of green hydrogen on the environment will be decisive.

“Spain is in the best position to be not just another hub, but the green hydrogen industrial hub in Europe (…) The Government of Spain’s commitment to Green Hydrogen is unequivocal. We are committed to mobilising 8.9 billion by 2030,” said Sánchez. To launch renewable hydrogen production, the Government of Spain is aware that clear public sector support must be provided. The Recovery Plan dedicates component 9 to green hydrogen, which will be afforded 1.55 billion euros over the next three years. A strong commitment to this technology will stimulate investors to mobilise up to 8.9 billion euros by 2030, with support from the public sector.

Already, 502 Expression of Interest proposals have been received for projects in the renewable hydrogen branch of the plan, mainly focused on two types, innovative value chain (55%) and pioneering projects (25%), with an investment volume of 10 billion euros.

The hydrogen drive is an energy transition gamble that will require extensive planning and the gestation of an entire regulatory framework.

The European Commission approved the European Hydrogen Strategy last year and, along these lines, the Government of Spain has launched the Hydrogen Roadmap; a commitment to position Spain as a key player in renewable hydrogen in the European Union, which will be possible by achieving the future installation of 4GW of electrolysers by 2030 in our country.