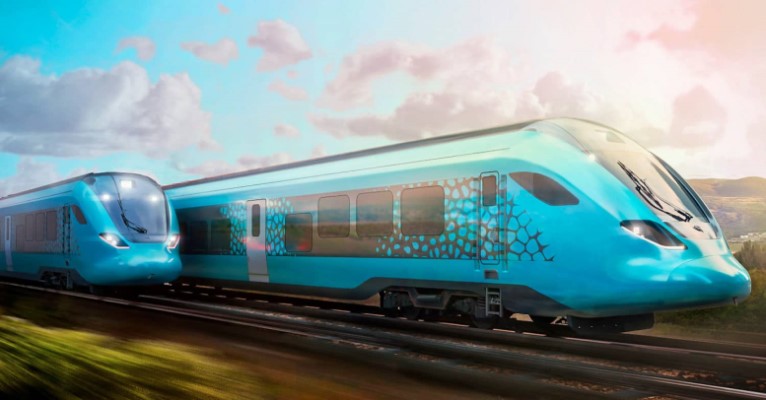 Portocolom AV | Spanish railway company Talgo is working on an innovative hydrogen train with the aim of replacing diesel-powered locomotives by 2023. With these new engines the company would replace diesel-powered ones in commuter trains and medium-distance trains, and thus take a step further on the way to climate neutrality, which Spain aims to achieve in 2050. The hydrogen train proposed by the company and called ‘Talgo Vittal-One’ in reference to the place of hydrogen in the periodic table is a very useful and emission-free alternative for non-electrified railway lines; an ambitious project that would help to considerably reduce the carbon footprint, a green technology which would go from using diesel, which emits polluting gases, to using hydrogen, which emits water vapour. The railway company is developing at its Rivabellosa plant in Alava the first units that will be powered by green hydrogen fuel cells supplied by Repsol. The two companies have signed recently an alliance to develop machines powered by this energy. All this within Spain’s strategic plan that aims to allocate more than 1,500 million euros of European funds to promote green hydrogen until 2023.

Hydrogen is the simplest and most abundant element in nature. The use of hydrogen is not new. In fact, its demand as a fuel has tripled since 1975. Electrolysis is the process by which hydrogen is separated from oxygen in water using electricity. Traditionally, the sources of the electricity used were fossil fuels, such as coal or natural gas, thus obtaining the hydrogen known as “gray”, whose emissions were equivalent to those of the United Kingdom and Indonesia combined. Now, however, renewable energies such as solar or marine energy are being used, thus reducing CO2 emissions by up to 2% of total annual emissions. This is known as “green” hydrogen. The advantages of using this energy are multiple and of great relevance: it does not emit polluting gases either in the combustion process or in the production process; it is easily storable and transportable; and it also stands out for its great versatility: it can be used as a generator of electricity and drinking water, to store energy and, perhaps the differential factor, for long-distance transport, so it could be used in aviation, heavy transport and maritime transport, key sectors and object of concern because of its impact on change. Of course, this energy source also has disadvantages: it requires greater energy expenditure, it is highly volatile and flammable, which means that it requires strong safety measures, and today it has a much higher cost than renewable energies. The good news is that it is estimated that production costs will fall by 50% by 2030. The use of green hydrogen is already a reality in countries such as the USA, Russia, China and France. Not to mention Japan, which aspires to become the hydrogen economy.