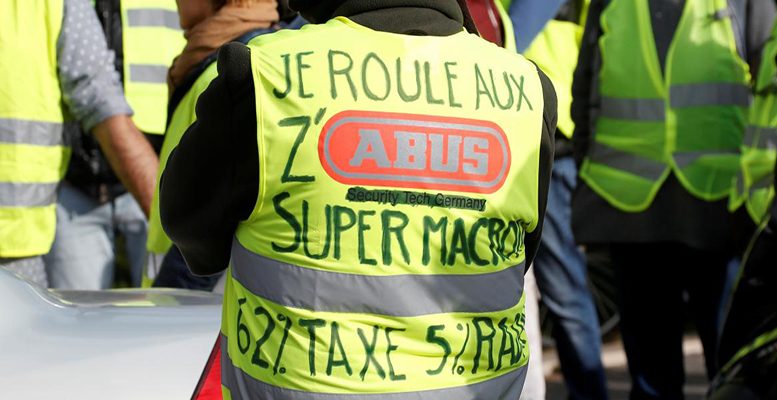 Fernando G. Urbaneja | President Macron, making good arguments, although not explaining them enough, wanted to raise taxes on fuel and millions of citizens forced him to back down. In Ecuador, President Lenin Moreno has gone through such a trance for the same reason. In Chile, President Piñera is on the verge of eviction for the attempt to raise urban transport rates.

“Massive protests”, overwhelming, apparently uncontrolled, but well organized citizens are protesting and challenging democratic powers. These are contagious movements that add unexpected risks. The only answer is to take a step backwards, then try to take the steering wheel. Public order conflicts are not solved by the police nor the armed forces. Conflicts that are extinguished can reappear at the slightest chance.

Macron modified his political strategy to get closer to the people, organising citizens’ mettings to listen and explain, but they have not helped him to start his reforms. These street movements barely carried any proposal beyond the opposition to power. In Madrid protestors argued that politicians didn’t represent them. Those who tried to do so have also failed.

A first lesson to learn is that apparently minor measures (a tax increase) can cause fires. Even those who will not be affected by the measure see an opportunity to express their anger.

In Spain, the new government, sooner or later, will have to act on taxes, starting with diesel and following reduced VAT rates. They may act by surprise or give explanations to Spanish people. They may aim for a parliamentary consensus (which is very unlikely) or for the social consensus (which is very rare). But politicians are not used to give details about their measures; they are not very familiar with the art of reasoned persuasion when there are no cameras.

The government that comes out of the election next November 10 will have to make unpopular fiscal choices, there is no alternative. They can opt for demagogy or persuasive reasoning. They know that taxes cause social fires. Taxes can be raised on the rich, on wealth, on banks, on multinationals… but collection will be low. Tax reform requires other arts that, poorly managed (even well managed), will cause fires.