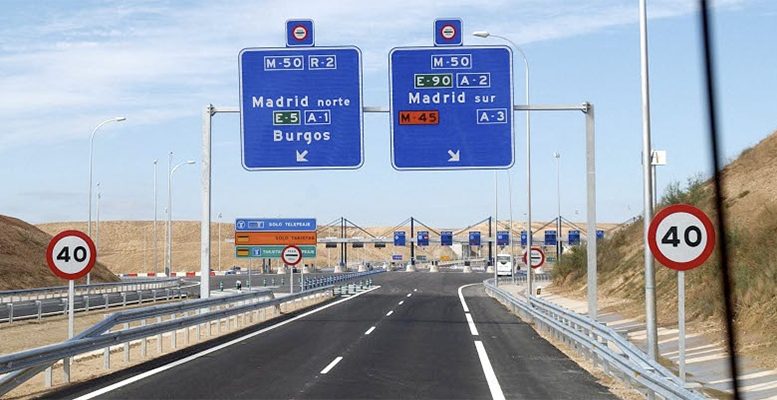 All governments find unexpected dwarfs popping up all over the place, but this one has them in abundance. The latest one, the problem of the eight bankrupt motorways, which they will have to deal with and pay for, according to a court decision. These are the four Madrid radials, the Madrid-Toledo, Ocaña-La Roda, Cartagena-Vera motorways and the  M-12 airport hub.

And this is a matter which could not have arisen at a worse moment. Irrespective of the cost of taking on the eight motorways, the government will also have to pay the concessionary companies – made up of constructors and banks – an accumulated amount of debt which in nominal terms will be over 5 billion euros. A figure which will be more than Finance Minister, Cristóbal Montoro, hopes to raise from his recent tax hikes: and close to the cuts which Brussels has demanded in order for Spain to comply with its deficit target. Which will prevent it, purely and simply, from meeting it.

So an amount which is impossible to pay. And, at the same time, there is no option for Spain but to pay this bill, however it can, given that it is not in a situation to fail to meet more commitments. In the last few years, Spain has been involved in difficult situations like that with the renewables, when the government decided to change the rules mid-game, cutting subsidies which had already been promised. This is a matter which is being looked at by the international courts, where a huge variety of investors and funds have gone to seek compensation.

In the case of the motorways, the damage to Spain’s reputation and image could come not so much from the Spanish construction companies, which are usually understanding with the government (the hand that feeds them). It could be caused more by the foreign banks participating in the concessionary companies and the so-called vulture funds, which are usually dangerous rivals and have a large capacity for messing things about  (as they showed in Argentina).

Some of these vulture funds have bought debt at 10% of nominal value and know they are going to emerge as winners: it’s a question of time and patience. It’s not going to be easy to gnaw away at this particular bone. Furthermore, and to make things worse, they are led by the now mythical investment bank, Houlihan Lokey, a master in restructuring and one of the toughest around.

So that’s how things are. And the government’s strategy is simple. It says it will pay, but nowhere near the 5 billion euros. Its idea is to pay out ‘just around’ 2.1 billion euros, less than half, but still an amount which will seriously complicate its deficit targets.

The government is not using any legal argument to support cutting the bill by so much. What it has decided to do is to use that magnificent instrument with which the Public Administration manages to crush its opponents, the slowness of the Spanish justice system. It has said: “If you want to get money back, at least this amount, it’s better to accept it, given that the alternative would be much worse.” And, effectively, the alternative, as the creditors already know, would be to wait for years for a decision from the courts.

But it won’t be easy. The poker game, the battle, or whatever, is going to be hard. In fact Ana Pastor tried in vain during her last three years in office to reach an agreement with the concessionaires, creditors and constructors for them to hand over the motorways free with an acquittance of 50% of the accumulated debt. And she did not succeed. We will have to see whether the current minister, Iñigo de la Serna, is better able to control the situation than Pastor, who did fairly well.

But is this attitude – pay as little as posible – good for Spain’s image? Possibly not, but in the current circumstances the government has no other way out than to use these tricks, very normal outside Europe, to get out of the sorry mess in which it landed itself years ago with the construction of motorways which were, and this is definitely true, doomed to disaster.

It was clear that it was going to be very difficult for radial motorways to capture traffic when they were running parallel to other free ones: which is what happened. This explains that the construction companies and the banks only got involved in the ‘business’ (ruinous) in exchange for very tough compensation. Because if they already seemed inviable, they cost more than expected. There were 2.2 billion euros in expropriations alone, when just 400 million was estimated.

Another factor is that the government, to preserve its image with public opinion and with voters, is interested in selling the merchandise which it has had to pay for, under contract – the courts have already obliged it to keep three of the motorways and will ensure it keeps all of them. But, in the end, it has emerged triumphant, paying as little as possible.

Those who criticised the bailout of the banks (or rather of the public deposits) have not waited long, after hearing this news, to accuse the government of not having money to hike pensions or find a solution to energy poverty, but having it to pay the banks and construction companies which are the motorways shareholders. A clear sign, they say, of which way the PP government blows, punishing the poor and rewarding the powerful.

Some of these critics are socialists. They have forgotten that during Zapatero’s time, this government awarded these concessionaires almost 600 million euros so they would not close down. These motorways are a minefield.