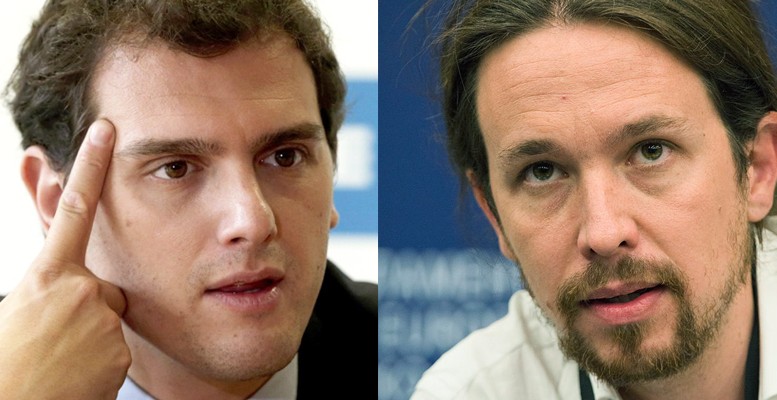 Polls predict no party will command a comfortable majority in Spain after the generel elections in December. It is the first time this has happened in the new era of democracy. No one knows for sure what the plausible consequences might be, but you can bet they will cause undue damage to the economy.

Unlike other countries where many well established parties have shared the parliamentary arena, ready to engage into coalition governments, Spain is witnessing the emergence of two brand new groups whose success is built on sweeping away the ‘old politics’. They both openly accuse the incumbent Socialist and Conservatives parties of malpractice, extensive corruption and turning their back on people’s concerns. They could become a real nuisance should their support prove necessary to form a stable government.

Ruling out Podemos as a potential partner, their extremist credo leaving little room for accommodation, Ciudadanos stands as the natural candidate for bringing one of the incumbents to power. It will most probably support the party securing the higher number of seats. According to the opinion polls, the Conservatives will enjoy that privilege. Yet it is highly unlikely that Ciudadanos would accept entering the cabinet.

After all, it is in direct competition with the Conservatives, disputing the favour of similar middle-class, urban voters. The chance for it to grow and become in the future a credible alternative for seizing power lies in opposing the Conservatives’ policies, even if they support their government. Should the Socialists snatch an unlikely victory, Ciudadanos would behave in much the same way.

So any government will suffer constant harassment from its ally. A bit of a nuisance in many policy areas, but turning into a nightmare when it comes to running the economy. Ready to exert their bruising opposition, Ciudadanos may decline into complete populism, rejecting any measure that people dislike. Economic policy would become asymetric, taking on board only user-friendly initiatives.

For the time being, Spain’s recovery is steaming ahead. But should implementing tough decisions prove essential, it is rather doubtful that Ciudadanos would accept sharing the burden. Shelving structural reforms will become the first collateral casualty. In those circumstances, the markets will price in the helpless situation any Spanish government will find itself in when enforcing unpalatable measures. A dim prospect for running the economy in a sound and authoritative way.