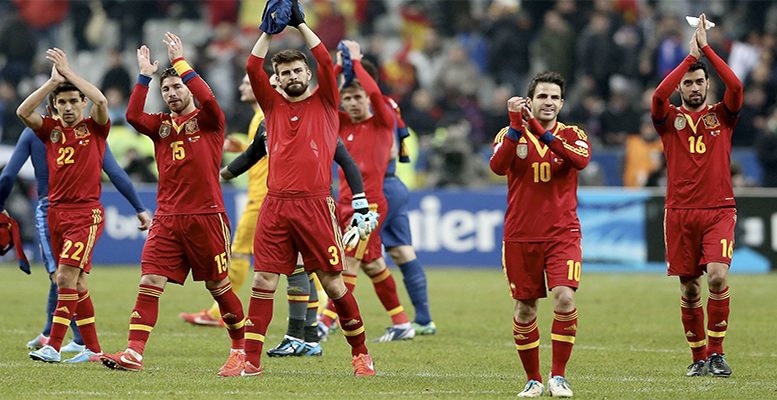 The latest call up for footballers for the Spanish team preparing for the next World Cup in Moscow finds an equivalent in the Spanish economy’s recent successes: its internationalisation and diversification, which go far beyond declarations and pretensions.

National coach Lopetegui’s list includes 24 footballers from 17 teams, eight from the Spanish league and 9 from the English, Italian and German football leagues. There has never been such a dispersion in terms of teams amongst those selected, all top players. It also puts an end to the traditional predominance in the selection of players from one or other of the two leading Spanish football teams: Madrid and Barça. Fourteen of the footballers chosen play in eight Spanish teams, while ten are from foreign teams. And this is not a temporary exception, but something which will be permanent.

The presence of foreign footballers, many of them from Latin America, has been normal in the Spanish League for more than half a century. Spanish football, like the economy, has always imported talent, including trainers and techniques. But the novelty now is that both football and the economy export everything, which has gone way beyond an exception to become a growing and permanent trend. Particularly given the efficiency of the football schools which are backed by many Spanish teams: they send out footballers and style; trainers as well.

At the time, in 1961, Luis Suárez’s transfer from Barcelona to Inter Milan was a big deal, as bizarre as selling Spanish capital goods in Germany. Now it’s quite normal for Spanish footballers to be picked up by European teams, just like sophisticated machines are exported or advanced engineering and infrastructure contracts are won across the world.

The Spanish economy’s internationalisation is one of the outstanding events of the last third of the century. And this has happened not just to the multinationals installed in Spain, chosen as a competitive factory. This has been a key factor in the transfer of technology to the locally-based fledgling industrial and services sector which quickly and diligently assimilated new and more modern organisational and productive models.

In the wake of this germinal phenomenon, thousands of medium-sized and large companies based in Spain have become internationalised. Firstly they exported their goods and services, then later made permanent investments in other countries. A phenonomen which means that Spain’s business fabric is now on European time, a leader in more than just a few industries. It’s similar to the country’s football, which has created its own exportable style, with improved techniques, capable of aspiring to be winners and remain amongst the leaders.

When giving advice to the prince, Machiavelli maintained that winning kingdoms is not complicated, but keeping hold of them and making them bigger is. This is the Spanish economy’s challenge, to keep up the pace of the recovery after the Great Recession and start notching up some points again in terms of productivity and competitiveness. Broadening the export base is crucial for generating more and better jobs and holding on to market shares.

Export and diversify, innovate to improve quality and creativity; this is what has been happening over the last 20 years in Spanish football, in all the categories and competitions. You can also see it in Spain’s corporate structure. The complicated thing now is not to copy others, do what they are already doing, but to innovate. This implies taking a risk to get further faster; investing, providing the capability, without getting distracted by banalities or obsessions which have no future.

The football teams, of all types, are amongst the best in the world based on their own merit, for their talent and their methods. And companies can also aspire to this excellence if they don’t get distracted and they are distracted. Politics is about not complicating things, but about facilitating and encouraging.