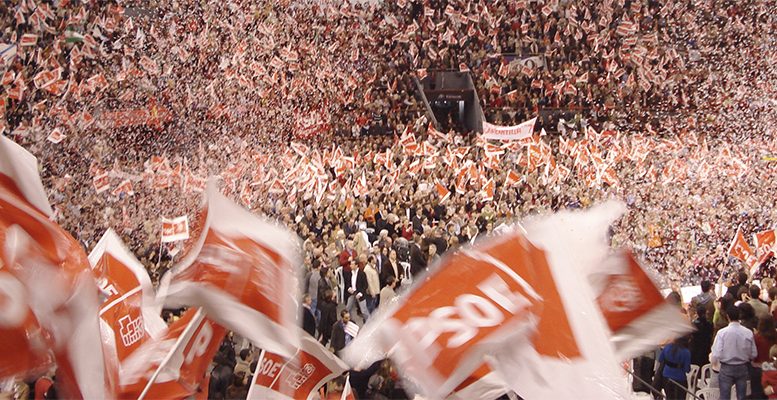 The gathering of endorsement signatures by candidates ahead of the leadership contest of the Spanish Socialist Workers’ Party (PSOE) is not usually seen as overly significant. The numbers are a vague indicator, no more, of the support a particular candidate can expect in the final vote by party activists. But this time, ahead of the PSOE’s May 21 primary, it’s different. The tension surrounding the race has lent extra importance to the record 63,000 signatures gathered by Andalusia premier Susana Díaz as she prepares to campaign for the leadership.

The tight nature of the race was made clear when Pedro Sánchez, the party’s former leader who is re-applying for the job, unveiled 57,000 signatures – a remarkable total for someone operating without the backing of the party machine and its heavyweight figures.

The PSOE has lurched from one crisis to another in recent years, as it has wrestled with the legacy of the 2008 financial crash and, more recently, with the arrival of Podemos to its left. It remains Spain’s second political force, but three humbling general election defeats since 2011, each worse than the last, have left it searching for direction and effective leadership.

Its choice in the upcoming primary is stark: between Díaz, who has long been groomed for the leadership and is steeped in the mores of the party; or Sánchez, whose previous, unspectacular, tenure as leader ended in acrimony in October and who is now presenting himself as a reborn party maverick.

Díaz’s alleged role in masterminding Sánchez’s fall adds an extra frisson to the contest. She is widely seen as having helped instigate the rebellion that sparked the messy, divisive ouster, which took place after Sánchez refused to abstain in a congressional vote to allow conservative Mariano Rajoy to form a new government.

With Sánchez removed, the PSOE’s caretaker leadership subsequently reversed that policy, easing Rajoy’s investiture. Sánchez, by contrast, has rued failing to reach out more when leader to the populists of Podemos and this is what strikes fear into the hearts of both the PSOE old school and Rajoy’s Popular Party (PP).

The PP worries that with the new, bolder version of Sánchez leading the main opposition party, the fragile consensus it has enjoyed with the PSOE’s caretaker leadership will be shattered and that he might even back a no-confidence motion Podemos is preparing against Rajoy, or even gang up with Catalan and Basque nationalists with a view to forming a new, left-leaning government.

Yet none of that is a given. His detractors like to paint Sánchez as a Spanish version of the UK’s Jeremy Corbyn – seducing grass roots party activists while accelerating towards electoral disaster with a 1970s Socialist manifesto in his hands. But there is a major difference: the PSOE’s conundrum has barely touched on policy and ideology. Instead, much of the focus seems to be on how a Socialist party should behave in relation to the new or resurgent parties to its left and to the nationalist parties on the country’s periphery.

And hanging over the whole contest is the suspicion that the two leading contenders are driven above all by personal ambition. Juan Carlos Rodríguez Ibarra, a Socialist former premier of Extremadura, has voiced this concern, warning that the candidates “are willing to fill their respective, arrogant saddlebags with votes” in order to lead a party which, he warns, is stumbling towards “the slaughterhouse”.

With the mainstream left suffering recently in France, Greece and the UK, the primary contest of the 138-year-old PSOE will be watched closely, not just in Spain, but by Socialists across Europe looking for clues on how to survive – or get slaughtered – in these uncertain times.