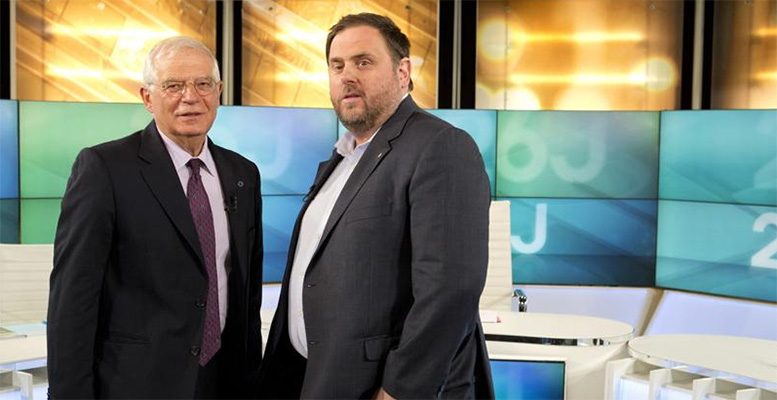 The Corner | The fiscal situation is one of the arguments the pro-independents in Catalonia have been using. And in this regard, we wanted to share with our readers a snippet from a televised debate of just over a year ago between Josep Borrell, a former president of the European Parliament, who describes himself as “Catalan, Spanish and European,” and Oriol Junqueras, leader of the pro-independence Catalan Republican Left (ERC) party.

What follows is a translation from the Catalan of the snippet between minute 15’25” and minute 19’42”:

You have always been an independent at heart, and you don’t need any kind of fiscal reason for wanting independence. But you know that in Catalonia there are a lot of people who don’t share this attitude. And for some time you have been trying to convince those Catalans who are not pro-independents, either at heart or emotionally-speaking, that independence would be very good for them from a practical viewpoint. And your are using a whole lot of arguments. But I will refer to one in particular.

You wrote a letter to all the European MPs in 2011, explaining that in Germany there is a constitutional law that establishes the Länder’s fiscal deficit at 4% of GDP. And if Catalonia were a German Land, it would be protected by this law and would not suffer the plundering of 8%. You have repeated this argument every day for many years: Ah, if only we were Germans and a constitutional law put a 4% limit on the deficit, because every year Germany calculates the fiscal balance of its Länder and limits it at 4%!.

Señor Junqueras, I have been trying to consult the fiscal balances of the German states and I haven’t found them anywhere. And as I couldn’t find them, I asked if someone could give me them. I asked the German embassy: And what about this 4% rule which Señor Junqueras talks about? And the answer is that this 4% limit you have referred to is nowhere to be found in German fiscal legislation. Whatsmore, in your own ERC’s magazine there is an article by professor Nigel, visiting professor at the Unversity Pompeu Fabra, saying that there are some who dare to establish that there is a 4% limit to solidarity in Germany. The Catalans will be surprised that in Germany fiscal balances have never been calculated. You have been telling the Catalans for years that the democracies calculate all fiscal balances and that in Germany, in particular, they do it every year and that each Land has a 4% limit. And I have here for anyone who wants to consult them arguments from the German embassy and from professors who write in your magazine denying this.

There is a generalised consensus in this country, it’s not my personal opinion, it’s not that I am giving an opinion on these matters. The dean of the Economics Faculty at Barcelona University, the President of the College of Economists of Catalonia, Señor Sala i Martín, who is very prestigious, says it’s a general opinion that this country (Catalonia) is making a very significant fiscal effort and, unfortunately, we don’t have the political clout to decide what we do with all this effort. You may think it’s a lot, or a little, that’s it’s not very relevant, because you’re lucky as you don’t lack resources. But in any event, listen, let the citizens of Catalonia decide on what to do with their fiscal effort. This is as legitimate as defending the opposite.