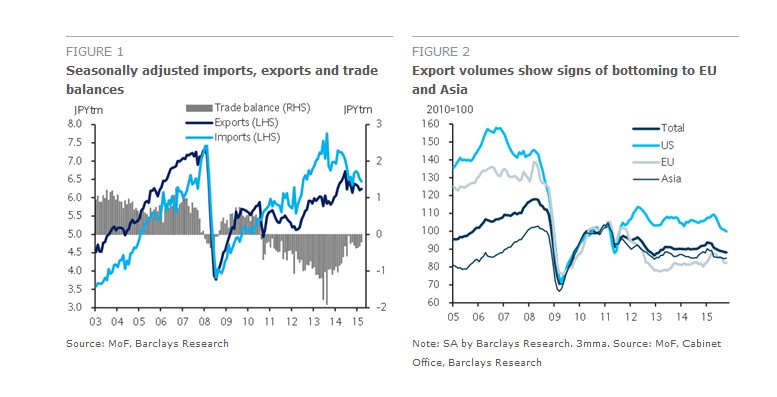 BARCLAYS | Japan logged a non-seasonally adjusted trade deficit of JPY112bn in October (September: JPY116bn deficit), moving into the black for the first time in seven months, contrary to market expectations for a deficit (Bloomberg median: JPY246bn deficit; our forecast: JPY131bn deficit; Figure 1) due to a larger-than-expected drop in imports linked to crude/partially refined oil and LNG.

In October, exports were underpinned by autos (to the US and Europe), but weighed down by ships, which fell sharply, along with organic compounds and steel – items shipped primarily to Asia. Imports fell sharply for items related to natural resources such as oil and LNG.

In terms of m/m changes, which reflect the more immediate trend, exports increased 0.6% (September: -1.7%), the first gain in four months, while imports decreased 1.1% (-2.3%), a third consecutive decline. From the viewpoint of effects on the real economy (eg, employment and capex), the trend in real exports and imports (volume), which account for price factors, is important. Based on our seasonal adjustments, export volumes increased 2.1% m/m in October (September: 0.3%) while import volumes fell 1.7% (1.4%). By region, export volumes rose 1.7% m/m to the US, 3.2% to Asia and 6.5% to Europe. Smoothed as a three-month moving average, the downtrend in export volumes to Asia and the EU appears to be bottoming (Figure 2).

We expect GDP-based real exports to increase 2.4% q/q in Q4, while imports rise 2.6% q/q. Based on our seasonal adjustments, export volumes were 1.2% higher in October than on average in Q3, while import volumes were 0.7% lower. The somewhat weak start for imports may imply a slight upside risk to our outlook for the contribution of net exports to real GDP growth. That said, real exports and export volumes have been showing a somewhat noticeable divergence. Real trade indices to be released this afternoon by the BoJ will be the next focus in determining the outlook for net exports.

In terms of energy import prices, which are key to the outlook for the CPI in general and electricity and city gas prices in particular, LNG fell 2.1% m/m in October (September: 2.4%), down for the first time in five months, while oil slipped 7.3% m/m (September: -15.5%), a fourth straight decline (Figure 3). Although the two moved in opposite directions through September, LNG import prices tend to follow oil prices with a slight lag and have now turned down, as expected. Dubai crude, which was trending around USD44/bbl two months ago, has now fallen to USD39/bbl, breaking the USD40/bbl threshold. In this light, we believe LNG import prices will likely continue to fall until at least April. There appears to be a strong view in the markets that oil prices will not rise much due to such issues as oversupply. If natural resource import prices stay around current levels, we believe the four major energy-related items (electricity, gas, gasoline and kerosene) would likely subtract about 1.2pp y/y from CPI inflation in October (a peak negative contribution), then subtract less until February, then more again in March-June.