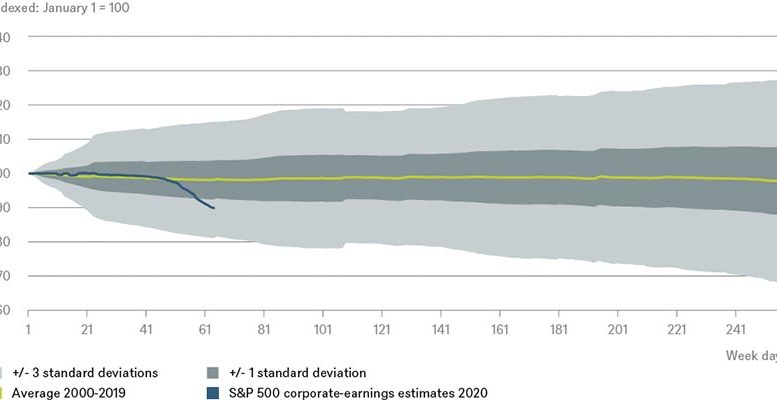 DWS | How bad could things get for corporate earnings, both in the U.S. and worldwide? In the face of a global health emergency, the short answer is that it remains hard to tell. Large parts of the world are under Covid-19 lockdown, delivering tremendous short-term shocks to the supply side and threatening to bring demand destruction on a massive scale. The disruptions will be comparable or worse than after September 11, 2001 and the onset of the financial crisis in 2008.

However, history can offer at least some guidance. As our “Chart of the Week” shows, consensus earnings estimates for the S&P 500 have occasionally been quite fickle as the calendar year progresses. Currently, they are at minus 10%, or a little more than one standard deviation from the normal trend, taking an average of the past 20 years. A fall by three standard deviations would correspond to a decline in corporate-earnings estimates of about 30%.

The devil is, as always, in the details. Three points are worth noting. First, for a fall in earnings estimates by three standard deviations, the Covid-19 crisis would probably need to be even worse and last longer than the consensus is currently expecting. Second, at least as far as U.S. earnings are concerned, there are are some reasons to expect more resilience than in past downturns. Over the past 20 years, the U.S. technology sector has dramatically grown in size. Strong balance sheets and relatively resilient cash flows among the U.S. companies of the “virtual economy,” such as technology, communications and internet retailing, should help the S&P 500. After all, virtual services, essential goods, health-care services, consumer staples and utilities are accounting now for about half of the S&P 500 profits. By contrast, energy, heavy manufacturing and financial services are smaller than in previous U.S. downturns.

Third and alas, the same is not necessarily true for the rest of the world, where many indices still tilt towards areas of what used to be called the “old economy”. This includes banks, where provisions for non-performing loans will probably have to increase, eroding profits. Energy too features prominently in global indices. “The oil sector alone accounted for around 6% of global profits in 2019. In 2020, that might well fall to zero, given the collapse in oil prices,” points out Thomas Bucher, global equity strategist at DWS. And outside the U.S., it is hard to see other sectors meaningfully make up for such shortfalls.