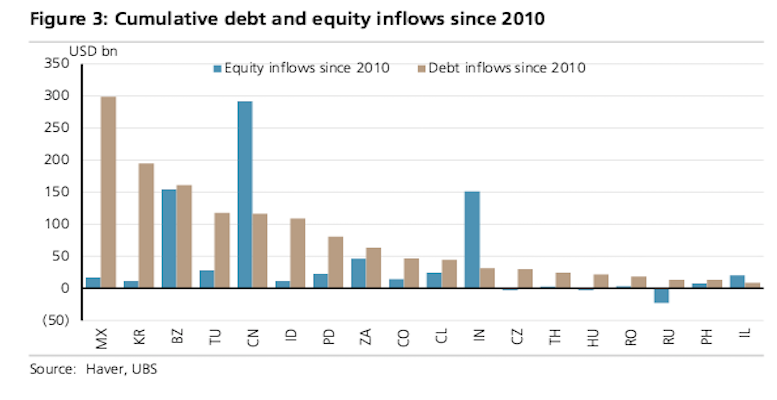 UBS | 2015 was likely to mark the fifth year of EM underperformance. The last time EM underperformed for as extended a spell as this was 1997-2001. And what a time to buy that was! Could 2016 provide a similar inflexion point? We would bet against it. The direction of US real rates, EM balance sheets, and China’s nominal growth are almost diametrically opposite, implying a narrower growth premium and a higher cost of equity over DM. The news on global trade and commodities will likely be incrementally less bad in 2016, and this should help improve returns from 2015, but that’s a low bar

Credit: The infection reaches the core of the EM investment universe

An extended period of weakness in EM income statements hasnow begun to infect balance sheets. The markets will not remain as enchanted with EM hard currency debt as the persistent flows of recent years might suggest. We are looping for spreads to widen 50-75 bps next year, with total returns between 0-2% both in hard currency sovereigns and corporates. We expect EM credit to underperform DM in both HY and IG spaces, but see better risk reward in playing this in the IG space.

We expect around 3% returns in EM equities next year. Earnings growth should improve to low single digits but that would be a much better outcome than -10.5% thus far in 2015. Once we have assessed EM equities at a sector level, we see no case for a re-rating of the aggregate index. The sectors where EM is cheap are exactly those where RoE has fallen too. The decline in RoE looks even more problematic given that leverage has gone up in EM companies, implying a steeper decline in RoA. We like North Asia and India over ASEAN and Latam, and IT and energy over consumer staples and materials. We see EM financials underperforming DM. Worsening credit worthiness and higher cost of equity will be a factor here.

Currencies: Keep calm and carry off

‘Are EM currencies there yet?’ has been the most popular question of the year. ‘No, they’re not’, has been, and remains our answer. With declining income elasticities to trade, currencies need to do extra leg work to gain competiveness. Current accounts are improving, and this should help to some extent, but this is taking place in the context of weak exports and credit deterioration, which provide powerful offsets. We expect the pressure on EM capital accounts to sustain in 2016. The nature of the currency selloff is becoming more intrinsic to EM rather than one driven by higher US rates or a stronger USD, which nonetheless don’t help. We remain negative on most of the high carry space –ZAR, TRY, IDR and BRL but also expect Asian currencies to catch up in weakness.

Local currency bonds: Get a life!

With the exception of 2005 there has never been a year of positive USD GBI returns when currencies sold off. 2016 will likely see a similar FX centric pattern, with total returns likely in the range of -2% to 0%. Duration itself should be better anchored as inflation remains low and several EM central banks will be cutting rates even as the Fed hikes. We continue to prefer India fixed income over Turkey and South Africa. In Mexico we like receiving the front end, but are negative on the currency. China and Korea should see their spread against the US come in further. We think it’s early to go back into Indonesia, but think the risk premia in Brazil rates now seems quite attractive.