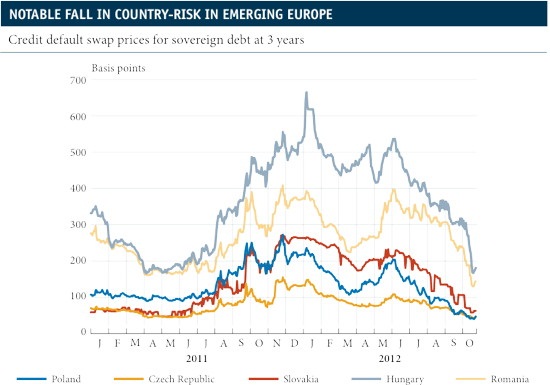 Looking more closely at the first of these two situations, namely financial calm, and as can be seen in the graph below, the different decisions and announcements that have been made at an EU level since last July (announcements of unlimited intervention but with conditionality in the secondary debt market by the European Central Bank; the German Constitutional Court upholding the European Stability Mechanism; more specific details regarding banking union) have played a decisive role in reducing financial stress on the financing terms for sovereign debt in emerging Europe.

At the time of writing this report, most financial analysts believe that the risk premium levels of these countries are an accurate reflection of their macroeconomic fundamentals (growth prospects, levels of deficit and public debt, etc.). This means that the hypothetical contagion, which in any case was never excessive outside the situations of Hungary and Romania, of financial tensions in the peripheral markets of the euro area has almost disappeared.

We should also mention that this relaxation in financial stress can also be seen in other risk assets, such as currencies. The appreciation of national currencies has been particularly intense in Hungary, boosted by the expectation of a financial agreement with the International Monetary Fund. This prospect is largely due to the fact that the budget forecast for 2013 is an appreciable advance towards correcting public imbalances and eliminates some measures considered by international bodies as difficult to accept. The appreciation of Romania’s currency has been much more contained, however, where the central bank is intervening to put a stop to this.

In spite of this financial relief, the latest developments in the area of macroeconomic activity point to this weak tone growing in the third quarter. The indicator that best reflects the trend in gross domestic product as a whole, namely economic sentiment, suggests that growth will slow down again in the third quarter. From July to October 2012, economic sentiment for the average of the five economies we normally cover in this report (Poland, Hungary, Romania, the Czech Republic and Slovakia) fell in the order of three percentage points to 89 points. These levels would be equivalent to regional growth in the zone of 1% year-on-year, very low for the countries in question. Although the economic sentiment indicator could be overvaluing the extent of the slowdown, it’s true that the third quarter will have been weaker in macroeconomic terms.

As from this low point, is the fourth quarter going to be the turning point in the cycle? In spite of the somewhat sombre data at present, certain leading indicators are helping to modify an excessively rigorous interpretation that states this situation will continue. For example, the composite leading indicator of the Organization for Economic Cooperation and Development (OECD) shows a trend towards stabilization in Poland, the benchmark economy of the region, in its figures for August. This would point to economic activity in Poland bottoming out towards the beginning of 2013. In addition, the production component forecast by the economic sentiment indicator for September shows a recovery that could be a sign of production picking up again towards the end of 2012. The only plausible factor to justify this improvement would come from a certain recovery in exports to the euro area.

Be the first to comment on "Emerging Europe: financial relief, macroeconomic weakness"