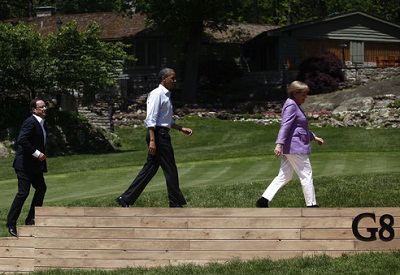 NEW YORK | There was a final statement, yet not a consensus about how to tackle the euro zone turmoil. Everyone in Camp David hoped that Greece will remain in the euro. For the first time, the argument that Europe cannot face more spending cuts gained widespread support. G8’s final communiqué showed a big push to German Chancellor Angela Merkel: it is urgent to bring deficits down through austerity measures (concession to Berlin’s push for austerity) but also spending in education and public works projects.

“The right measures are not the same for each of us,” G8 statement said. Behind the scenes some differences remained over what kinds of stimulus measures to adopt.

Merkel, who according to the German newspaper Süddeutsche Zeitung did not appreciate François Hollande and Obama meeting before she got to the mountain retreat in Maryland, seemed isolated at times. She stated that growth and deficit cutting reinforced each other.

“We have to work on both threads, and the participants have made that clear, and I think that is great progress,” she said. “We are certainly open” to more use of the EU’s development bank and infrastructure funds for Greece, but Greece must keep to the strict terms of its bailout loans.

American officials quoted by The New York Times said they hoped that after Camp David, Merkel would get closer to the pro-growth argument in the next European summit this week.

Despite the relaxed atmosphere, the greeting between Obama and Merkel was tense, according to the same newspaper. The U.S President has been one of the main pro-growth pushers. In this election year, Europe’s fate is a crucial issue to his political survival. An economic recession that spreads to this side of the Atlantic could damage an already slow recovery and boost the Republican’s argument that the country economy needs a new government.

Even though Spain was not among the G8 guests, it was an intense weekend for Spanish Prime Minister Mariano Rajoy due to François Hollande’s remarks about Spanish banking system. Hollande said he was favorable to a European mechanism to support the recapitalization of Spanish banks.

“I don’t think so,” Rajoy told journalists on Saturday after arriving in Chicago to take part in a two-day NATO summit.  “I don’t really know if Mr. Hollande said that, because if he said it must be because Mr. Hollande has information that we don’t have,” he added.