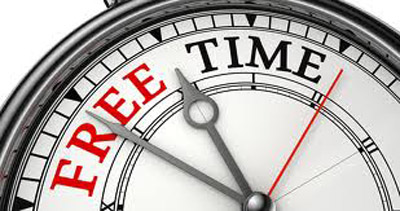 Having breakfast, going to the office, running some errands, fixing dinner… routine looks pretty much the same in all developed countries. In the U.S. there is an interesting study (the American Time Use Survey) conducted by the Bureau of Labor Statistics about what people do in their typical working day. It measures the amount of time people spend doing various activities, such as paid work, childcare, volunteering, and socializing.

It’s worth taking a look:

As for selected activities, people rather play videogames or watch TV (1 hour 34 minutes) than socialize (21 minutes). Americans tend to work hard and get home exhausted. Although their amount of nonwork time available has not changed significantly since the 1970s, public opinion surveys consistently report that Americans believe they have less free time today than in the past.

Last year, the OECD ranked the United States No. 1 in terms of household wealth but 12th in life satisfaction out of 36 countries tracked. One of the causes, experts point out, is that millions of Americans are having a hard time to make ends meet. The country has one the largest gaps between the rich and poor: the top 20 percent of the population earns nearly $82,000 a year while the bottom 20 percent get by on just $10,600.