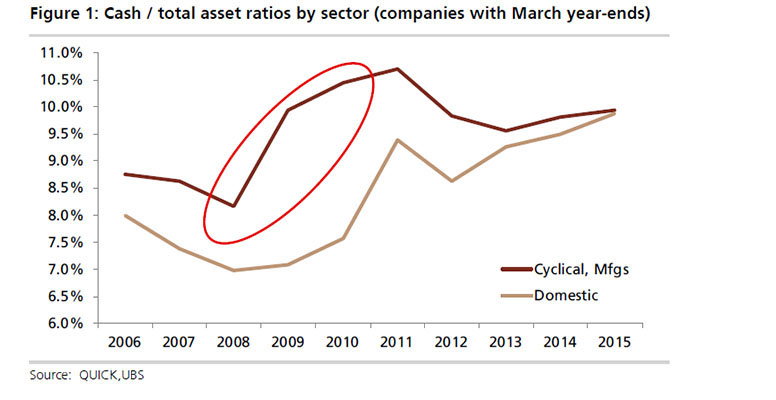 UBS | Could the BoJ shift its terms of reference for policy? In September PM Abe fired off three new arrows: a strong economy, parenting support, and social security, setting a nominal GDP target of ¥600trn as the first of these. A nominal growth rate of 3% would achieve the ¥600trn target in FY21.

However, he made no mention of what would be done to realize this or of any specific policy changes, and this was not taken as a positive incentive by the market.

Even then we think we can say the government has shifted its terms of reference in the form of Abenomics Stage 2 at least until September 2018, when PM Abe’s term of office as LDP leader will come to an end. The government has expanded and shifted its targets from overcoming deflation to nominal GDP. In this context activity at the BoJ merits close attention. The BoJ may also consider a similar paradigm shift alongside the administration’s three new arrows. We put the probability of further easing in Q4 at 50%, and our main scenario is for the BoJ to ease on 30 October. As far as we can tell from the recent BoJ Tankan, the outlook DI worsened beyond last October’s figure, while companies’ expected inflation rate fell further than last October. It is clear to us that there is even greater need for easing at present than in October 2014. If the BoJ acts on 30 October the government and BoJ could point to a concerted approach to stimulate the economy by coinciding this with a supplementary budget announcement (economic stimulus package) by the government.

On top of increasing ETF and JREIT buying, our main scenario for further easing envisages accelerating expansion in the monetary base by about ¥5–10trn a year through means such as buying long-term JGBs with maturities of over 25 years, local government bonds, and zaito agency bonds. However, if the BoJ were to change its terms of reference it might commit itself to a nominal GDP level as well, on top of its current policy of targeting 2% inflation. This would effectively mean a BoJ target for nominal GDP. The benefits of this would include (1) gearing up commitment through closer collaboration with the government, (2) strengthening commitment towards buoying up the economy, and (3) reining in factors such as overblown expectations of a weaker yen. On the other hand, demerits would be that it takes time to pin down the picture for nominal GDP and that there are no key benchmark indicators such as the expected inflation rate. Adding a target for nominal GDP to the inflation goal would be similar to the Fed’s approach of targeting prices and the unemployment rate, and communication with the BoJ would likely become more important. Expanding the monetary base is the main policy thrust under an inflation target in isolation, but under a new paradigm of committing to nominal GDP, as well, two further policies would likely be important: (1) a substantial increase in purchasing risk assets such as ETFs and JREITs, and (2) the Loan Support Program to stimulate lending by financial institutions and reductions in the interest rate on excess reserves.

Setting a nominal GDP target has been widely debated in academic circles, and several central banks have considered adopting such a goal. For example, in academia Michael Woodford of Columbia University in the US supports setting a target for the level of nominal GDP from a new Keynesian model framework. The UK’s Bank of England’s governor Mark Carney also mentioned this in a speech in 2012. There is growing interest in a nominal GDP target as a fresh central bank policy framework at a time of debate over the efficacy of inflation target policies.

No fall in companies’ cash; new policy needed to force its use

The intrinsic, serious problem in Japan’s stock market and corporate activity at present is that companies are not using their cash, in our view. More accurately,they are accumulating cash and surplus funds faster than their earnings grow.

There are concerns that this problem will become even more acute amid growing speculation of US rate hikes. At the very least, we think there will be a lack of incentive to actively allocate cash to shareholder returns or to business investments at a time when companies are likely to scale back commitment to emerging economies, which have been a major source of earnings hitherto, particularly for the manufacturing sector, and it is easy to see them driven by the need to prepare for an imminent slowdown in global economic recovery. Indeed, manufacturing companies increased savings more rapidly than domestic demand-driven firms during the previous financial crisis in 2008–09, demonstrating swift action to prepare for a downturn in market conditions.

Given these behavioural trends, it is clear that companies are likely to scale back cash consumption, in view of the peak / peaking-out of markets following the last rate hike. Put another way, if the global economy peaks with no countermeasures put in place, companies may continue to accumulate surplus cash still further, and measures such improvements in governance and ROE may prove to be nothing more than an illusion.

In this sense point (2) ‘the Loan Support Program to stimulate lending by financial institutions and reductions in the interest rate on excess reserves’ in the paradigm shift outlined above could represent a major stimulus policy. Clearly support for lending does not mean companies will necessarily borrow, while even if a reduction in the IOER leads to negative interest rates companies may move swiftly to rescue funds and avoid the adverse impact of negative interest rates, without consuming cash. However, there is a strong sense within the Abe administration that policies are at a standstill and options are limited under current conditions, and it is clear that launching a rapid succession of such measures would provide the greatest stimulus, or at least that increasing purchases of JGBs and risk assets under the prevailing method cannot trigger any structural change. Indeed, TOPIX ROE has struggled to rise since 2013, remaining roughly flat (Figure 2). In other words, we believe that it is time for the true value of the Abe administration’s economic policies to be put to the test. Abenomics and Kurodanomics could end up as nothing more than one peak within the cycle in Japanese equities’ long history unless policies can be invoked that effectively and specifically make companies use cash, even forcibly, at this point in time, in our view. We would like to see announcements of a drastic, unconventional new type of monetary easing and a policy that specifically works on companies’ investment activity as one such initiative.