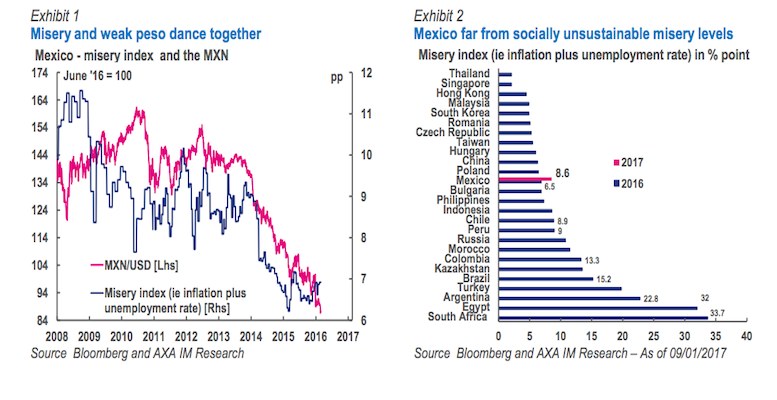 These words of José de la Cruz Porfirio Díaz Mexican general and politician who served seven terms as President of Mexico between 1930 and 1915, fit pretty well now that Mexico is being threatened by more US trade protectionism.

As AXA IM’s analysts remind, international trade is a critical component of US economic growth which Trump reiterated in his inaugural address, though with little detail over the policy outlook. In the days following the presidential inauguration, the media reported that President Trump would sign executive orders intending to renegotiate the North American Free Trade Agreement (NAFTA) between the US, Canada and Mexico. Eliminating NAFTA enacted in 1994, which increased US exports to Canada and Mexico by 258%, was something promised by Trump in the run up to US elections. The decision by the US automaker Ford to scrap a planned investment in Mexico, in lieu of investing more in its existing Michigan plant following criticism by Donald Trump, signals a drop in US foreign direct investment to Mexico, too.

With four out of every hundred cars produced in the world made in Mexico and the auto sector representing 3% of Mexico’s GDP, Ford’s decision sent shock waves to Mexico. A current account deficit of 3% of GDP financed, among others, by foreign direct investments of 2% of GDP, only added to the concerns. Mexico already announced a six-month repatriation scheme of undeclared corporate or individual holdings abroad at a preferential 8% tax rate from the current 30-35% rate, in an attempt to provide some relief to the balance of payment. Experts explain:

We believe that Ford’s decision is not the beginning of a domino effect, where either non-US or US auto manufacturers will shut down their operations in Mexico and bring them to the US to boost international competitiveness. Corporates abroad will have to wait for more granularity on the new US administration’s tax and regulatory proposals before deciding to bring their operations in the US. However, we acknowledge that a domino effect with disruptions in the supply chain is possible, triggered by an increase in US trade protectionism and international competitiveness.

Social instability would increase as the unemployment rate in the Mexican states would rise due to a significant dependence on auto production, while inflation would move higher due to a MXN depreciation versus the dollar at rates reminiscent of the 50% depreciation versus the dollar when the MXN-USD peg collapsed at end-1994. This could result in people feeling more misery.

However, Mexico is still far away from the misery levels (41) it witnessed in 1995 after the tequila crisis.The MXN is still under pressure versus the dollar with FX forwards, once adjusted for past values of the forward premium, pencilling in another 10%yoy depreciation versus the dollar in 2017 from 19% in 2016, entailing a 4% drop in the trade weighted MXN adjusted for relative inflation.

Consequently, headline inflation would increase by 1.2 percentage point (pp) in 2017 with the scheduled gasoline price increase in Mexico adding an extra 0.4pp to headline inflation, bringing the full year print to 4.5% in 2017 from 2.9% in 2016. The increase in inflation would erode the purchasing power of individuals, and with consumption growth declining by 0.3pp, this would bring real GDP growth down to 1.3% in 2017 (previous forecast 2017: 1.2%), from 1.7% in 2016.