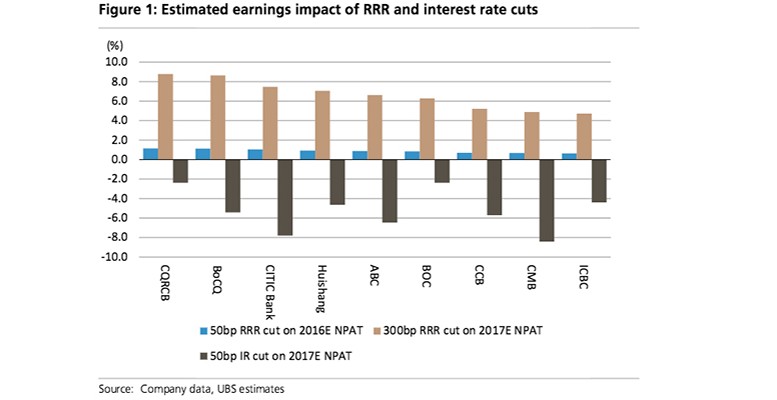 UBS | On 29 February the People’s Bank of China (PBOC) announced a 50bps cut in the reserve requirement ratio (RRR). We think RRR cuts are having a diminishing impact on banks’ incentives to lend, since the loan -to- deposit ratio (LDR) limit of 75% has been removed. The problems therefore remain sluggish corporate loan demand and banks’ own risk selection in a slowing economy. That said, banks should at least benefit from increased deposit spreads, as deposits with the PBOC pay a 1.62% yield, while the average deposit funding cost is about 2.4%. For example, reallocating deposits to the seven – day interbank rate would currently yield about 2.3%.

Lending surged in January (though growth in February should be more moderate given the Chinese New Year holiday), with PBOC data suggesting the market share for net new loans was 22% for the Big Four banks (below the historical average of about 32%. Corporate and long – term retail lending increased as did net bond issuance by policy banks in January. This implies that policy banks could increasingly take on more infrastructure/project – related loans. We believe this is a positive development for the Big Four banks as there could be a shift away from old economy/overcapacity exposure. We expect banks to use the new liquidity arising from the RRR cuts to provide more value – adding loans rather than replacing existing loans, as investors become increasingly concerned about asset quality. Our economics team expects more policy easing to come, it believes the PBOC will cut RRR by a total 300bps and benchmark rates twice more, or 50bps in total, in 2016. This would take the one – year deposit and lending benchmark rates to 1% and 3.85%, respectively. Our calculations suggest smaller banks tend to benefit more from RRR cuts, a ssuming they can continue to lend at higher yields and maintain stable risk management.

We continue to prefer: 1) China Construction Bank (CCB) for its strong capital positioning and the likely rise in infrastructure spending; 2); China CITIC Bank for its stronger consumer lending and internet – related businesses and; 3) Bank of China, which we see as a key beneficiary of the ‘One Belt, One Road’ initiative and rising US rates.