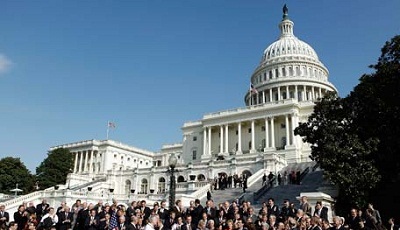 NEW YORK | They call it Obama’s reluctant blessing: the US president has given top bundlers the green light to raise cash for the political organization that supports him, Priorities USA Action.

Barack Obama was an outspoken critic of the 2010 Supreme Court’s decision that allowed these so called super Political Action Committees (Super PAC’s) to raise unlimited amounts of money from corporations, unions or individuals. An increasingly big group of people in the US considers that this allows big money to buy elections. So far, for the 2012 elections, 313 groups organized as Super PAC’s have received almost 100 million dollars and have spent 46, according to Center for Responsive Politics.

Jim Messina, Obama’s campaign manager, defended the decision as the only way to avoid getting blown out in the general election:

“Over the last few months, Super PACs affiliated with Republican presidential candidates have spent more than $40 million on television and radio, almost all of it for negative ads. We can’t allow for two sets of rules in this election whereby the Republican nominee is the beneficiary of unlimited spending and Democrats unilaterally disarm.”

As Politico’s Jim Vandehei puts it, the little secret in Washington is that

Be the first to comment on "Super PAC’s: Incredibly loud, extremely powerful"