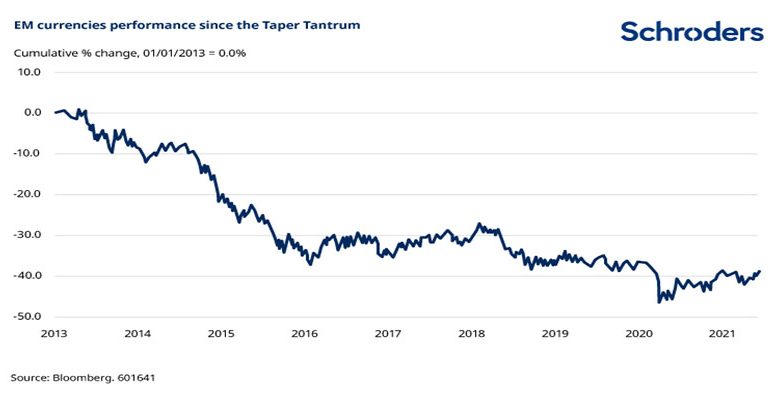 James Barrineau (Schroders) | Since March of last year, emerging market (EM) currencies have risen by a gaudy 12.8% versus the US dollar. Near-term there have been some sizable moves, such as a 10% gain for Brazil’s real versus the US dollar since the end of March this year.

That naturally leads to the suggestion that EM currencies may be getting expensive, but such a view does not take into account the damage done by the 2013 Taper Tantrum.

The chart below shows the full extent of the damage done, and the fact that the recovery has in fact only been modest.

The relative cheapness of EM currencies has led to a significant improvement in external accounts.

Even with some recent deterioration, surpluses are very near 20-year highs. For us, that represents a margin of safety against a Federal Reserve (Fed) taper that might come sooner than thought a few months ago.

Lastly, central banks in some key EM countries have raised interest rates, and China has curbed credit growth. EM inflation has risen mostly due to higher agricultural prices, which are likely to ease at some point.

Continued slack across economies, even as growth resumes, makes it unlikely that we will see a return of structural inflation eroding currency value.