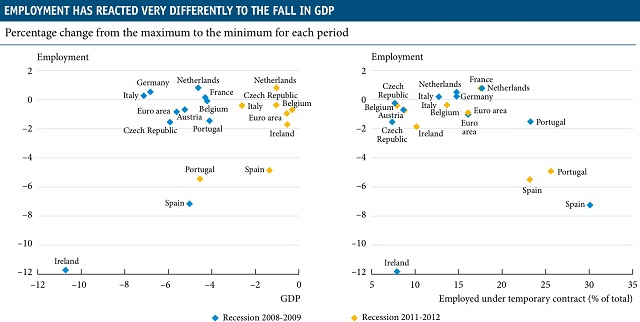 Differences in the unemployment rates between countries are still very wide, from Austria’s minimum of 4.5% to Spain’s 25.1% and, for the moment, there’s no sign of these differences narrowing.

This is reflected in the European Commission’s opinion indicators for September on the intention to generate jobs over the next three months for the euro area as a whole. These suggest a further contraction in employment, particularly in the sector of industry, whose figure fell by 0.6 percentage points to 13.3 negative points, a level it hadn’t reached since March 2010.

However, although all show a clearly negative trend, the divergence of this variable between countries is substantial. Germany is in a more favourable situation than the rest of the euro area economies, although since May it has also started to post negative values, a value as from which jobs are normally lost.

To be able to analyse the differences in the labour situation between countries in more detail, we need to compare how their labour markets respond to changes in economic activity. Within this context, it can be seen in the graph below that the differences in job losses between the cyclical maximum and minimum point are highly significant. This spread is partly the result of the different intensities in the recessionary processes of each country. However, this explanation is not enough to justify the fact that, for example, the number of jobs fell by 1% in Austria and by 7% in Spain during the crisis of 2008 (blue points), although they saw similar falls in GDP, close to 5%.

Therefore, as highlighted in a study by the European Central Bank («Euro area labour markets and the crisis», Structural Issues Report, ECB, September 2012), the nature of the disturbance and not only its gravity might have affected how the fall in GDP is passed on to the labour market. So those countries that, in 2008, underwent the bursting of the real estate bubble and, during previous years, had experienced growth in credit and significant current account deficits, saw a greater fall in employment.

However, those countries that started their recessionary phase due to the worldwide slump in trade experienced a more temporary shock involving fewer job losses.

At the same time, other institutional components in each country’s labour market might have also affected how much employment adjusted in the recession. In this respect, those countries that, for example, had a larger proportion of temporary contracts before the crisis recorded a relatively higher rate of job losses.