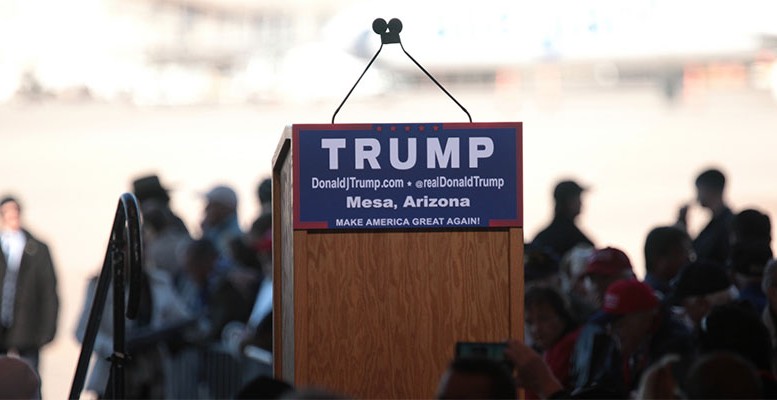 *This article was published by Fair Observer.

Larry Beck | For those of you who continue to believe that America is a great nation deserving of the respect and admiration that much of the rest of the world seems to have forgotten about, the 2016 presidential race to the sewer will provide a plethora of feel good moments.

Mexicans and Muslims are already cowering as campaign crowds acclaim an impenetrable great wall of the Rio Grande and cheer for a search and destroy regimen to keep suspicious religious adherents from our shores and out of our communities. If you think this isn’t quite good enough, there has been and will be much more.

For some it is uncomfortable, but for me it is rewarding to see America’s conservative inner core exposed. It seems that a significant segment of that populace has been waiting for someone to come along who loudly proclaims that he alone can make America great again. It is instructive that there is not much definition given to “great” as it applies to America’s past, present or future. What is clear is that their path to making at least white America “great” again is greased by exploiting fear and appealing to the same base instincts that have driven fascists everywhere to periodically crawl from their caves for another shot at a big dance.

Furthermore, the “again” part suggests that America was once great, lost that greatness and now is being given a roadmap to reclaim that greatness. This leaves the American exceptionalism crowd in a confused dither. Since “exceptionalism” and “greatness” are more or less the same thing to these delusional folks, the concept of lost greatness dumps them in some type of exceptionalism vacuum.

Enter Donald Trump to restore “greatness” and refill the “exceptionalism” bucket to the brim. This elixir is to angry conservatives what “keep hope alive” was to dispirited liberals the last time around. But as with hope, it will take more than a slogan to make America great.

Unlike Trump and his supporters, I am willing to define a national commitment that is likely to engender renewed respect and admiration for America at home and abroad. At a minimum, it will take a commitment to a progressive agenda that attacks the ravages of poverty; that ensures honest wages to workers and fairly taxes those with too much; that seeks to ensure real justice for all; that makes peace at home and abroad a priority; and that protects the planet that America the great has done so much to endanger.

In this context, it is most instructive to hear Trump’s ardent supporters proclaim that he is the only candidate with the courage to actually say what his supporters are thinking. So as Trump’s numbers continue to go up, keep in mind that those numbers reflect a growing sector of the American electorate that really does want Muslims banned from the US and really does want a Mexican border wall built and ardently believes that somehow Mexico will be forced to pay for it.

While these core elements of Trump’s rallying cry are troubling enough, it has now become obvious even to many on the right in America that Trump’s supporters are apparently thinking what Trump is saying about a whole lot of other things as well—about a white vision of America that would turn back the clock on already-strained race relations; about an America where women know their place; about keeping gay and lesbian Americans out of our communities and in their closets; about the appropriate use of torture to meet real or imagined security objectives; about killing the wives and children of our enemies to make a point; about how gun rights are more significant than human rights; and the list could go on.

In short, Trump has managed to channel the inner fascist that lurks at the core of conservative America. Now it is entertaining to watch “establishment” Republicans try to cage the beast that they themselves have unleashed with years of mindless attacks on governance and government, with politely-disguised enmity to blacks, gays and immigrants, and with a frontal assault on whatever hope President Barack Obama brought to the table. However, once the dust settles, you can be sure that the country-club elite will down another martini and line up behind the new “hero” they have spawned.

What Has America Lost?

This brings us back to making America great again. Having contributed to Trump’s appeal in the first place, the press finally seems ready to stop fawning over Trump long enough to seek some clarity. At the least, Trump should be required to give his vision of greatness a measure of content. Exactly what did the nation have before that it has now lost and that Trump is prepared to regain?

Rambling gibberish about “greatness” should not be treated as a substitute for a substantive response. Even the “Trump says what we are thinking” crowd should pause if Trump cannot clearly define for them what they are thinking, since apparently they cannot articulate it for themselves.

None of this should give anyone confidence that Trump will eventually be unmasked as so much less than he believes himself to be. He is a likely bet to become the nominee of one of the two dueling political parties in America’s version of a free election for its highest office. Further, given the obscene amount of money that will be spent to market the candidate of each party by those whose self-interest has nothing to do with the public interest, it should be anyone’s guess who will win.

Regardless of who wins in the end, I am not at all confident that his/her definition of America’s greatness, continued or reclaimed, will house the homeless, feed hungry children or slow the march of death and destruction made in America.