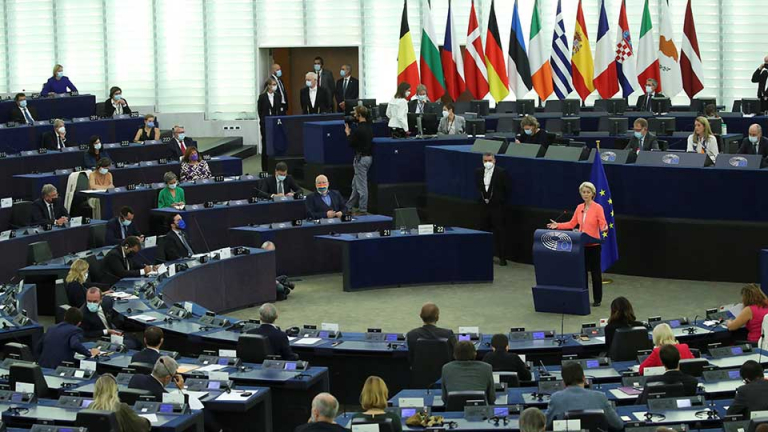 European Views | The news that China lost billions of dollars from closing down coal power plants across its Belt and Road (BRI) – Beijing’s colossal tool to systematically bind the world to China – provides an insight into the true state of Beijing’s project of the century. Resistance for the project is rising, given that outcomes in participating countries are rarely the win-win situation that Xi Jinping has promised. Instead, the BRI has become synonymous with high levels of debts owed to China, opacity, and favouring state-owned enterprises (SOEs). Now, the situation is set to deteriorate even further for China following Brussels’ launch of its “Global Gateway” (GG) programme in September.

A foreign policy instrument explicitly designed to counter the BRI, the GG diametrically opposed to China’s investment approach by seeking to “create links and not dependencies”, in the words of European Commission president Ursula von der Leyen. The GG’s launch comes at a time when the EU is feeling the adverse effects of BRI-induced encroachment within its own borders and wider neighbourhood. Several EU countries, such as Italy, Greece and Bulgaria, have controversially signed up to the project. But while concerns of Chinese influence in the EU is rising, perhaps the starkest warning of the BRI’s negative effects in Europe is still to be found in a non-EU country, namely Montenegro.

The EU-hopeful has been suffocating under a crippling $1 billion debt accrued under the BRI to which the Balkan country signed on as early as 2014. That year, Montenegro penned a $1 billion deal for a highway from the port of Bar to the Serbian border with the Export-Import Bank of China. But the initial enthusiasm for the project waned quickly as dangerous road construction work through the country’s mountain gorges is still underway, two years behind schedule. The tender for the roadworks has also been tinged with suspicions of high-level corruption by the politicians behind the agreement.

The expense of the road saw the country’s debt balloon to 103% of national output, with more than a third of the government’s annual budget owed to China and annual interest set at a staggering 2% of the loan. A leaked copy of a confidential loan agreement showed that China was in a position to seize the land as collateral in case of non-payment. As it became clear that Montenegro could not repay the loan, falling confidence caused the value of Montenegrin bonds to plummet. Eventually, Montenegro turned to the EU for debt refinancing in March, hashing out repayment arrangements with Germany’s Reconstruction Credit Bank and France’s Development Agency.

Montenegro’s debt problem is a warning shot across the EU’s bow and is partially responsible for the GG. Now the question remains how to apply it to countries even deeper in Chinese debt, many of which are much poorer but geostrategically important. The one country that has come to exemplify all the negatives of the BRI – high debt, excessive domestic Chinese influence, and SEO favouritisms – is Djibouti at the Horn of Africa.

The lopsided relationship between Djibouti and China has given Beijing a strong strategic foothold since the early 2000s, when the PRC began making inroads into the country through the renovation of schools and the construction of football stadiums. In 2013, it chose Djibouti for its first foreign military base due to its geographical location between Africa and the Middle East, paying vast sums of rent to strongman President Ismail Omar Guelleh.

China then leveraged its accumulated influence to push through three major bilateral projects. The Djibouti to Ethiopia gas pipeline has raised serious environmental and humanitarian question marks, while the railway track funded by China has proved to be a cash sinkhole and risks repossession as the Covid pandemic significantly limits profitability—fuelling fears of ‘debt diplomacy’ in the region. But perhaps the most worrying example of Chinese encroachment of all is the unsolicited ownership change of the crucial multi-purpose Doraleh port, which has garnered international attention for the unceremonious expulsion of a foreign investor in order to receive Chinese funds and favour.

Three years ago, Djibouti ousted Dubai port operators DP World from their 30-year concession of the Doraleh Port Container. DP World’s share was then handed to Beijing’s state-owned China Merchants Group, who imported their own workforce and have been managing the dock ever since. Although DP World has won several international arbitration cases against China Merchants, Guelleh continues to stick to his guns—not least because China shores up his fragile Presidency. In the meantime, the country’s debt to China is so great that it is currently “threatening its autonomy”, according to international experts.

Both Montenegro and Djibouti present extraordinary challenges for the EU and are litmus tests of the GG’s efficacy, especially in regions vulnerable to extreme Chinese pressure, such as Africa. There are a number of low-hanging fruit that Brussels needs to consider if it hopes GG to be successfully competing against China’s $47.4 billion worth of investments in Africa alone. For starters, the EU seems to have realised that China’s “bigger equals better” approach when it comes to country partnerships is often misguided. Montenegro shows this clearly, given the ballooning project cost with little to show for it. Neither has Djibouti seen an economic boom from Chinese involvement in the port.

Consequently, Europe’s added benefit lies in creating value-added production in Africa, ideally in combination with its European Green Deal policy, in order to create new industries that will remain relevant for decades to come.  In doing so, the EU must clearly distinguish its investment style from China, which should be most obvious in the way projects are tendered: by emphasising transparency during the procurement process, and preferring local, regional or national companies as contractors – not European ones.

The GG will be discussed with African leaders during the February 2022 EU-Africa Summit, meaning there’s plenty of time for Brussels to identify strategies for engaging countries across the globe already entangled in the BRI. Although its red-tape heavy investing style could act as a disincentive to many poor countries, the GG can be a viable alternative to the BRI. Whether it will be able to pull countries like Djibouti out of China’s orbit, however, remains to be seen.