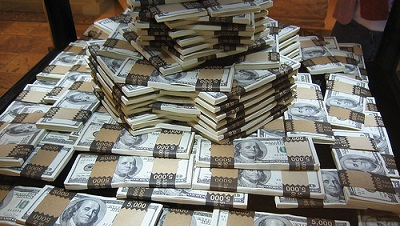 NEW YORK | It is the latest mantra on Wall Street: US companies are sitting on a lot of cash, $1,2 trillion, and that’s only counting non-financial companies in the Standard & Poor’s 500, says the Association for the Financial Professionals. This is a record: up 70% from 2007 and 200% for the past 10 years.

This huge war chest makes a lot of people wonder: what are they waiting for? Why aren’t they already going shopping, buying companies? Or at giving dividends?

The best example is Apple. It is debatable (and debated) how big is their coffer: some say is more than the cash in the US Treasury, that it reached already $100 billion; others say the real cash figure is much smaller, and do not include the $70 billion in long-term marketable securities. They reduce it to 52 billions. Still, why are they doing nothing with it? Apple investors are hungry for dividends, and expect the company to do something similar to what Microsoft did in 2004: a one time $35 billion dividend to share holders. But it seems this is not in Tim Cook’s mind as yet.

AT&T for example, tried to expend some money, by buying T-Mobile, but the government stopped them. Apple could easily, some say, buy all at once Netflix, Research in Motion and Nokia.

24/7 Wall Street compiled the data from SEC filings for the biggest companies, and this is what they found out: Microsoft is the one with more corporate money to expend, $51 billion in cash, cash equivalents and short-term investments; Cisco is very close, with $46 billion; then we have Google, $44 billion; Oracle $31 billion and Apple in the fifth place with $30 billion.

Another question that it is arising, and one that it is becoming quite political, is where they have all that money. As Barrons puts it:

“American corporations are sitting on record amounts of cash, but that doesn’t mean their greenbacks are safely tucked away at a bank down the block from headquarters. To the contrary, billions of dollars worth of corporate cash and short-term securities sit in foreign subsidiaries located in undisclosed countries. A lot of this money might not even be in dollars. Microsoft, for example, has 6.4 billion of cash and investments in the US and 51 billion in other countries.”

Only 59% of US companies’ cash is in the US, states the Association for the Financial Professionals.

Be the first to comment on "US huge corporate cash piles: 41% sits in foreign accounts"