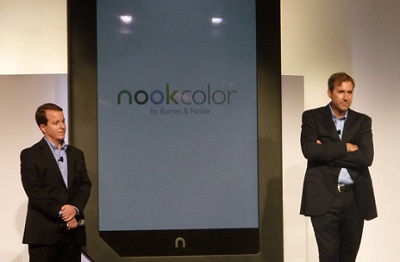 NEW YORK | Microsoft entered the battle for the e-readers this week thanks to a strategic partnership with Barnes & Noble. Their alliance, dubbed as NewCo, gives Windows creator a 17.6 percent equity stake for a $300 million investment and values B&N’s remaining 82.4% stake at $1.4 billion.  According to Goldman Sachs analyst Matthew Fassler, the deal is a “game-changer.”

“The shift to digital is putting the world’s libraries and newsstands in the palm of every person’s hand, and is the beginning of a journey that will impact how people read, interact with, and enjoy new forms of content,” said Andy Lees, Microsoft president, said in a statement.

For analysts, this marriage makes a lot of sense. It enables Microsoft to go back into the e-book business after a disappointing attempt in year 2000. As for the bookstore chain, it will solve its cashflow issues and benefit from Microsoft’s global scale. Besides, the alliance puts end to an ongoing patent battle between the two firms (Microsoft claimed that the Nook tablet, that runs on the open-source Android operating system, violated its patents).

“This deal is a bit like one of those high-profile investments by Warren Buffett in a distressed company: a vote of confidence by someone powerful enough to be able to fund the struggling firm through its troubles.

“Except in this case, the Microsoft investment is much bigger than that, since it comes with deep integration into the Windows 8 operating system. Barnes & Noble no longer needs to sell Nooks, or persuade people to download the Nook app on their iPad: everybody with a Windows 8 device will have the Nook reader built-in,” Felix Salmon writes for Wired.com.

The battle over e-readers and tablets in the US is a furiously-paced one. Amazon is in the pole position with about 65 percent of the e-book market and presence in more than 175 countries, while Barnes & Noble has 20 percent and Apple has 10 percent at most, according to estimations by Cowen & Co quoted by Reuters.

“Amazon’s Kindle Fire has over 50% of the Android OS Tablet market share win the USA, and B&N needs a credible road map for it to succeed,” professor at Boston University’s School of Management N. Venkat Venkatraman, explained to AP.

One should wait for volatility and interesting moves in the industry.

“The Windows/Nook and iOS/iBook teams will naturally have much tighter integration between bookstore and operating system than anything Amazon can offer (…) We finally have a three-way fight on our hands in the e-book space, between three giants of tech: Apple, Amazon, and Microsoft. And that can only be good for consumers,” Felix Salmon points out.