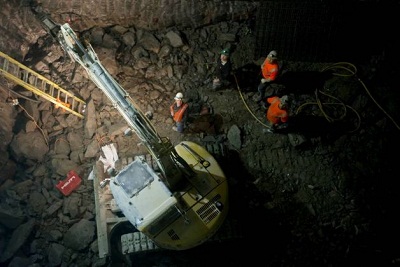 Next Autumn, a panel of arbitrators will open hearings over the New York dispute confronting Spanish construction giants OHL and ACS, which blame each other for the mismanagement of tunnel excavation costs in their joint venture for a subway project. But its outcome is unfortunately known, already: it is set to please nobody. Least of all investors in both companies, analysts in Madrid say.

Works to extend the Long Island metropolitan train to the East Side of Manhattan have repeatedly been delayed for years and costs updated on the upside. Transport authorities are adamant to assure the connection will be made before August, 2019. Yet, the confrontation between the Spanish partners, through subsidiaries Dragados (ACS) and Judlau Contracting (OHL), spells doubt.

What financial experts fear is that there is more at stake than a deadline and a €200-million loss. This battle could affect the firms’ reputation, too.

“The case is bad news,” Ahorro Corporación Financiera told shareholders. “Talk of losses and accusations against the Spanish companies’ capabilities to fulfil international operations are very negative, precisely when global expansion is crucial because of the downturn in public infrastructure activity in their domestic market in Spain.”

Up to 15 percent of ACS construction sales are realised in Spain, whereas for OHL the figure is 26.5 percent. Both rely heavily on external demand, then, and the US features within the top five list of clients. So why the kerfuffle?

These companies are attracting attention abroad for the wrong reasons at a time Spain’s industry must show competitiveness and efficiency to increase its market share outside home. In fact, the more details are known, the less understandable the conflict sounds.

The financial City of Madrid has reported that stock prices should not move much because the damages have been assumed by both companies while in the process of completing East Side plans. The impact is limited: 3 percent of ACS capitalisation and 5 percent of OHL’s, according to BSanalisis. Unless a contract revision favours to take in the new situation, the Spanish building corporations can kiss the expected €163 million profit goodbye with just minor pains.

OHL and ACS could have dealt with their differences in a quiet manner. New York officials are likely to feel upset about their argument, and prospective customers and associates will find the whole situation unsettling at best. Spain’s major enterprises have successfully raised their global presence, and many middle size companies show sufficient muscle to follow them, but a change of attitude should match those efforts.

Be the first to comment on "Spain’s ACS, OHL clash in New York"