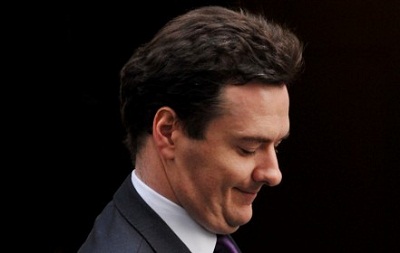 LONDON | It was inevitable. The UK woke up Thursday saddled by a 50/50 chance of losing the maximum award of its national borrowing capabilities. After all, as Santander analysts poke out of Fitch Ratings’ statement over its outlook downgrade of the triple A, which British sovereign bonds still hold, the growing public debt to GDP ratio is set to approach the edge of the top-gun category. The figures came from an independent department appointed by Chancellor George Osborne himself, whose command of the national economy hit a low one week before the 2012 budget is unveiled.

“Consistent with Fitch’s sovereign rating criteria and historical and international precedent, the projected peak for government indebtedness is at the limit of the level consistent with the UK retaining its ‘AAA’ status.”

Yet, Whitehall may have given one more lesson to its European counterparts in the continent about how best handling threats over negative ratings. Indeed, the Treasury did not claim Fitch was leading a plot against the last Anglo-Saxon bastion of the triple-A crown, or that the indictment was a French revenge channelled through Paris-based and Fitch’s major stakeholder Fimalac.

“A week from the budget, this is a reminder of why it is essential Britain sticks to its plans to deal with its debts,” the official press released by the government read. “This is just another warning to anyone who believes there can be deficit-financed giveaways in next week’s budget.”

But the facts are clear in the City’s view. The message from Fitch Ratings regards the UK’s structural budget deficit as still large in spite of the Coalition cabinet’s austerity programme, and government debt is high and rising. In King & Shaxon’s note to investors, moreover, Osborne is reminded of the stress Fitch’s alert puts particularly on his shoulders:

“Just a week before the Budget, it places pressure on Chancellor George Osborne, who had made retaining the AAA rating a priority, to get finances and policies under control to boost growth.

“The U.K. retains its AAA rating but the weaker outlook means that there is over 50% chance of a downgrade in the next two years. The move comes exactly a month after Moody’s also placed the U.K. on negative outlook.

“Markets may view this negatively however and gilts may under-perform bunds and US Treasuries as a result.”

In Madrid, Bankinter experts added that the UK’s trade balance in January has deteriorated from December, with a deficit of -£7.532 billion from -£7.184 billion the previous month. Expectations were even worse, though, pointing at -£7.9 billion.

Still, Fitch Ratings could not avoid sparking the odd grievance.

“Only a few weeks ago the ratings agency told me explicitly that they believed Britain’s rating was stable,” Sky News economic editor Ed Conway protested. “Everything that has occurred between now and then has been positive rather than negative for the rating. While it may well be the right decision, one is still left asking why it was made at this precise moment.”