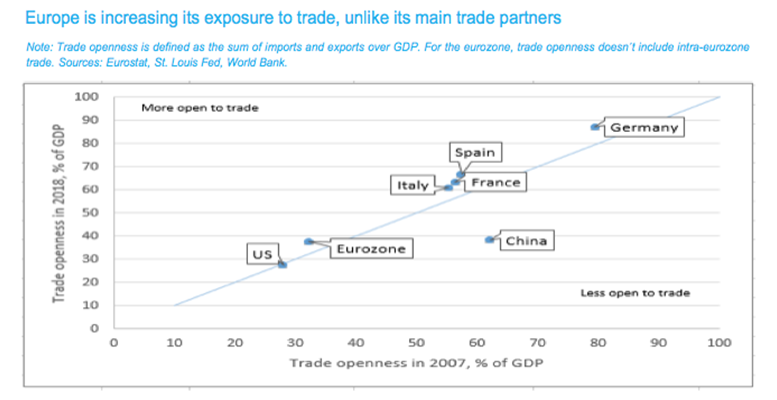 Monex Europe | The euro’s fortunes turned sour in 2019 despite the year starting with a positive outlook. At the beginning of the year, the ECB expected a sensible recovery from the transitory downfalls of H2 2018. They projected that the growth rebound would be sufficient to halt the Asset Purchasing Programme (APP) in December of 2018 and signal the normalisation of interest rates in the second half of 2019. Instead, the Eurozone economy was trapped in the middle of heightened US-China trade tensions; rampant Brexit uncertainty; synchronised monetary easing induced by a slowing global economy; and threats of automobile tariffs from the US.

With increasing exposure to moderating external demand and falling domestic inflation levels and expectations, the ECB was left with no other choice but to offset deteriorating conditions with further monetary easing. A wide set of traditional and unconventional tools was put in place, ranging from interest rate cuts, to the resumption of the APP and strengthened forward guidance.

The combination of lower relative yields and mounting economic uncertainty extended the euro’s downtrend which began in early 2018, opposite to the expected rebound in the second half of
2019. The euro’s price action however, has also been subject to historically low levels of volatility, with similar instances occurring back in 2007 and 2014.

A fair explanation for this behaviour lies within the improved liquidity provided by monetary policy easing worldwide, along with robust signs of market complacency. Looking forward into 2020, we expect the euro to finally break this trend on the back of improved external conditions under the US-China base case, despite a broad monetary stimulus package already in play. However, a structural rebound in the currency still faces considerable challenges.

Positive but mild rebound in Eurozone’s prospects for 2020

The high sensitivity of industrial production to global trade was the main driver of the Eurozone slowdown in 2019. According to a Goldman Sachs estimate, two-thirds of the economic deceleration in the Eurozone can be attributed to the weakness in external demand.

Germany alone, which accounts for over a quarter of the Eurozone GDP, incurred the most significant annual drop in industrial output in ten years last June, while annualised export growth fell 8% – a three-year record. The manufacturing recession has been broadly aligned with the downward trend in the Purchasing Managers Index, which bottomed out at its lowest level in history, with a reading of 41.7 in September 2019.

If a turnaround in manufacturing PMIs and an improved outlook on US-China trade tensions are good proxies for German growth, the largest Eurozone economy should reach an inflection point in Q4 2019/ Q1 2020 having narrowly avoided a technical recession in Q3 2019.

Investor sentiment may also find another leg of support from the increasing likelihood of a smooth Brexit transition, along with avoidance of auto tariffs from the US. Nevertheless, global uncertainties could put a lid on the rebound in industrial production if they continue to persist in the first half of 2020. Other structural challenges are also likely to mute the manufacturing recovery, including tighter environmental standards and energy- related technological changes in the car industry.