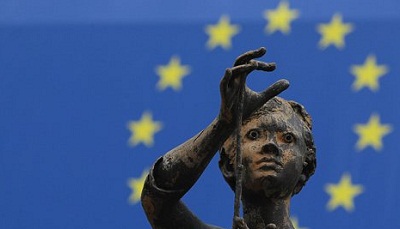 LONDON | The discussion on whether to invest in European mega-caps or small-caps at this moment is alive and well. It might be a signal that the markets feel tired of the daily mess it is served by the euro group and prefer a the-show-must-go-on attitude. But funds and investment banks voice their trust in uncovering opportunities amid volatility.

“The market view on the most likely prognosis for the Euro crisis seems to evolve hourly, rather than week by week,” Kernohan says. He is optimistic. “Our base case assumes that a way is found through the current impasse and that peripheral debt markets stabilise over the next few months, preventing a disorderly break-up, although downside risks are significant.”

Kernohan assures that a euro break-up would create a much more serious crisis than the collapse of Lehman Brothers in 2008.

Yet, Martin Cholwill, manager of the Royal London UK Equity Income Fund, considers that investors are currently in fearful mood and focussing almost exclusively on the euro zone crisis, ignoring the improving prospects in the US and the likelihood of a soft landing in China.

“Investors are also overlooking the overall strength of corporate balance sheets and ongoing cashflow, which should encourage M&A activity in due course and be supportive of the market.

“Companies with the ability to convert profits into cash, and with ready access to cash, have plenty of scope for value-creating acquisitions funded by free cashflow and are likely to be the longer term winners.

“This is one of the reasons why I prefer mid-caps over mega-caps; the latter are typically bid-proof and far more likely to be the acquirers rather than the takeover targets.”

“Despite the recent rally, valuations for European smaller companies remain close to the bottom-end of historical ranges. Economic activity remains remarkably resilient across large parts of northern Europe, with the region also home to a number of exporters with significant exposure to growth in the US, China and the wider emerging world.”

Baring explains that following the marked sell-off over the second half of 2011, the trust increased its exposure to more economically-sensitive sectors such as energy, industrials and consumer discretionary.

“…we remain positive on the outlook, particularly in the energy sector where we believe selected firms are well placed to benefit from rising capital expenditure from oil majors.

Although the Williams admits Baring is still fully aware of the unbalances between core EMU countries as Germany and the Mediterranean peripherals, he concedes that

“European markets have been boosted recently by policy moves and a combination of a permanent €500bn bail-out fund, set to start by the middle of the year, and the availability of low-cost loans from the European Central Bank has helped to ease contagion fears.”

You heard the itchy-feet investing troops.

Be the first to comment on "European mid-caps attract some love: Royal London and Baring"