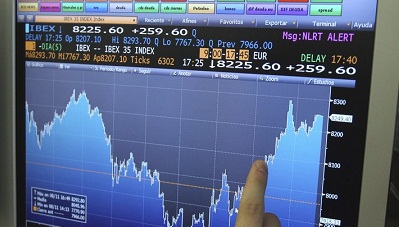 By Julia Pastor, in Madrid | The Spanish stock market fell Thursday by 2%, specially because of the severe punishment suffered by its listed banks. On Friday, analysts at Link Securities commented that

“as good news came from Greece, European financial shares were regaining ground but Spanish banks behaved differently… we see that the only reason that explain this fact is the end of the short- selling veto.”

After France and Belgium on Monday removed the ban to go short on financial shares, it was just a question of time that Spain would do the same. The CNMV, the Spanish market authority, announced on Wednesday that

“the situation of extreme volatility, uninterrupted instability and uncertainty on the European stock exchanges and particularly on financial shares have subsided during the last weeks”. On the  other hand, the CNMV’s press release explained that the ban “may generate some adverse affects on the market activity, liquidity and depth, so that it is necessary to restrict its period of valididity as far as possible.”

“it is still soon to know the impact of the short-selling ban withdrawal” Furthermore, the Catalan bank’s experts note that “going short was forbidden from August 2011, so it makes no sense to say that  positions have risen on companies (unless it was due to securities hedging, which do not affect the company price in the same way). On the other hand, we cannot know the real short-selling increase until the moment of settlement is registered or two days after.”

Capital Madrid pointed directly to Bolsas y Mercados Españoles (BME) as to be the most benefited by the ban removal.

“The company has very promising upward expectations. It is among the favourite candidates of many asset managers. It is estimated that the end of the short-selling veto on the financial sector will increase trading by 16% on average, which will have an important effect on the group’s quarter results.”

“as the short-selling restart coincides with the euro zone’s position deterioration due to a possible Greek default, it is expected that banking sector activity will grow strongly, which will in the second part of February compensate for the last days of grim trading volume.”

Be the first to comment on "Capital Madrid: “resuming short-sales could increase trade of financials by 16%”"