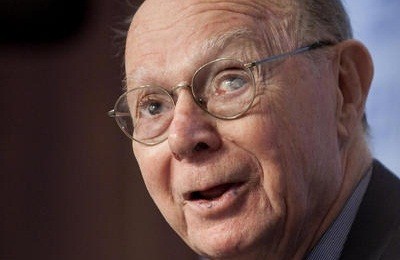 WASHINGTON | “Capitalism without failure is like religion without sin, it does not work,” had already said Allan Meltzer in 1969. Pittsburgh's Carnegie-Mellon University teacher and author of the monumental History of the Federal Reserve is the same conservative who advised John F. Kennedy and Ronald Reagan. Under Clinton's presidency he was in charge of a U.S. Congress committee that essentially claimed the end of the World Bank on the basis that the growth of many emerging economies would make much of development aid unnecessary. Would you tell us what Europe should do? Split into two euros. On one hand, we'll have a 'soft euro' which would include countries like Italy, Greece, Ireland, Portugal and Spain. On the other hand, the 'hard euro'. Periphery euro would float along with the central euro. The 'soft euro' currency would only be temporary. Countries that would adopt it should take advantage of devaluation to carry out a fiscal adjustment, and once their public accounts will accept it, they'd go back to the 'hard euro'

Wouldn't that mean a massive capital flight from that peripheral euro to the central one that would lead to impose capital controls first and then finally sink the value of the euro weak? No. Devaluation would be fast, and it could re-activate the fiscal policy.

What about the banks? What would happen to them? They would need public help. And German, French and other countries' banks too, because their banks would go bankrupt. So countries would need to agree on a political consensus, mostly euro 'hard' countries would need to support the 'soft'. And by supporting I not only mean intervene in markets, but also to design economic policies that favor monetary stability. Will it be painful? Of course.

But Europe will not leave this issue behind without suffering. But, of course, neither the Germans nor the French want to hear about injecting public money to their banks. The problem in Europe is that there doesn't seem to be a political will to design any economic policy in a coordinated way. Look at production costs in Greece, Italy and Spain: they are between 30% and 20% higher than in Germany. Are you going to accept a Great Depression, with income cuts of 20% (in Spain) or 30% (in Greece) to recover lost competitiveness? No. Will Germany accept an inflation that would allow you to win 20% or 30% of competitiveness? No. One thing is clear: it will be very painful to get out of this crisis.

You are the Fed's best-known historian. Yet you have been very critical of Ben Bernanke… The Federal Reserve did the right thing at the beginning of the crisis. Well, it actually caused the crisis, letting Lehman Brothers fail. But then it reacted quickly. However, Ben Bernanke is now making a seriou

s mistake: he is making the Government's fiscal policy. Their 'quantitative easing' is not having too much effect. At least that is what suggest the studies I've read so far. But it is a way to monetize debt. And that will end generating inflation, sooner or later.

But that is not happening so far. This reminds me of the early seventies, when some monetarists, including myself, warned that the U.S. monetary base was eroding. Nobody listened to us. A few years later, the U.S. entered into hyperinflation. But there are worrying signs. Productivity is falling, and wages are rising. That is one of the things that nobody wants to see in the current U.S. economy.

There are more things that nobody wants to see. For example: not only Federal Reserve, the ECB has enthusiastically joined the monetary easing and is helping countries to build their tax policies. And, after a long period of doubt, the Bank of Japan has begun to do the same. So we have all the major economies laying the groundwork for a bout of inflation. Look at the Federal Reserve. It has bought a trillion dollars (750 billion of euros) in mortgages. A central bank should not have long-term assets. The Fed only did that during war periods. It is keeping excessively low interest rates, and is therefore helping banks to recapitalize.

But banks are not passing this liquidity in credit to the entire economy. In the end, it's like we are using everyone's money. Except that instead of paying via taxes, direct or indirect, we will pay with inflation, which is like a tax. We have the lowest interest rates in our history, and more foreign reserves than we could imagine. It's absolutely silly to make the 'Fed' getting involved in new programs of assets purchasing. That will not revive the economy and all we will get is devaluation of the dollar.

You have also criticized the Federal Reserve's policy related to banks since the financial system got stabilized. The Fed had never bought long-term bonds before. Well, only in wartime. Central banks do not buy long-term bonds. By doing so, they are acting like the Treasury. The Obama administration will not obtain authorization from the U.S. Congress to raise debt so it is leaving that job to the Federal Reserve. And the Federal Reserve is also rescuing the banks, lending money to them at interest zero and is allowing them to make up treasury operations (repurchase) and increase their manager's pay. We will pay that with inflation. This is a problem that comes from the very mentality of the Federal Reserve. I have spent all my life reading the minutes meetings of the Open Market Committee [the body of the 'Fed' which sets interest rates] and I can guarantee you that with very few exceptions, they never speak about the long term. Only with Paul Volcker [Fed's chairman from 1979 to 1987] there was clearly a long-term.

The IMF has recently changed its Managing Director and the World Bank will do so in June. What is your advice to both institutions? Close them.