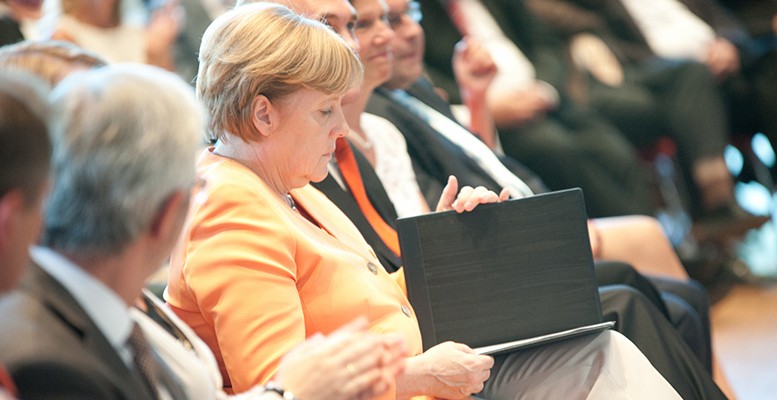 Lidia Conde |The conservative members of Angela Merkel’s Christian Democratic Party (CDU) do not understand that she does not want to put a limit on the number of refugees. And now even her coalition partner in Berlin, the Social Democrats, criticise her for underestimating the scale of the challenge. So to what extent will Merkel be able to impose her ideas? Who can replace her? Is it a viable proposition to integrate all asylum seekers who arrive in Europe?

“Angela Merkel is not as conservative as she should be. The conservative politicians of her Christian Democratic Party (CDU) have lost their political hearth. Merkel has caused millions of people to be without a political party. It is a serious mistake and one of the reasons for the flight to the extreme right party, Alternative for Germany (AfD). Merkel should tell the truth about the challenge of integration.” This reproach does not come from the right but from the head of the Social Democratic parliamentary group, Thomas Oppermann. Which shows the social and political polarisation (the Social Democrats rule in coalition with Merkel’s Christian Democrats in Berlin) generated by the wave of migration. To what extent will Merkel be able to impose her ideas?

Merkel has not explained why she decided in September to open the German border after the blockade of refugees in Hungary. But people from her party also do not understand that Merkel does not want to limit the number of emigrants. Now even the Social Democrats criticise her for underestimating the scale of the challenge. “The German government is giving a chaotic image with the refugee crisis,” criticizes Oppermann.

Merkel has also not got EU support for her policy. Eastern Europe does not want to know anything about it. Nor do three out of five French. “Europe cannot take in more refugees,” said Prime Minister Manuel Valls. Even the President of the European Council, Donald Tusk, recognises that the idea of sharing refugees does not have the support of EU countries. Merkel’s position was weakened in 2015.

But is there anyone to replace her? Where are the grand European politicians?, asks the Munich daily Süddeutsche Zeitung.

If she is being criticised from outside, how will it be on the inside? Merkel’s Bavarian partner continues to accuse the chancellor over her refugee policy. Horst Seehofer, chairman of the regional government of Bavaria and leader of the Christian Social Union (CSU), a partner of Merkel’s CDU party, insists on imposing an annual limit on refugees. Seehofer believes that if the flow of migrants is not limited, “1.5 million people will arrive in 2016.” This is impossible to assimilate, according to Seehofer. In December alone, 4,000 foreigners per day arrived through Bavaria. “It would be logical that all EU states finally showed their willingness to accept war refugees.”

Germany, increasingly isolated, will not be able alone to assimilate or integrate all asylum seekers arriving in Europe. Merkel and her government are drowning in that dilemma and will have to react. Merkel’s clear intention is to help. But will is not power in this case. In 2015, more than one million refugees arrived. How can Germany take in more and more without European solidarity? Moreover, it is unclear how they could impose a limit on the flow of refugees. This limit is not contemplated in the Basic Law that recognizes the right to political asylum. And Germany is a country in the heart of Europe, bordering nine European countries.

So far it seems that Germany is doing well and that it will continue to do so in 2016. The economy will grow by 2%. For now, the Germans can afford to finance the right to political asylum, but for how long?

There is almost no unemployment. Corporate profits are shooting up. Inflation is not taking off. And interest rates are very low. This makes the Germans, currently euphoric, buy and support growth with strong domestic demand. Furthermore, the state has increased its expenses. The billions of surplus allow for the funding of a first class cyclical programme, says Cerstin Gammelin from Süddeutsche Zeitung. Teachers, translators, police, social workers, doctors and health personnel etc. are being hired to attend to one million refugees. Jobs are created, demand is generated. Housing construction is encouraged. That is the short-term consequence of immigration.

In the long run, there is the potential burden of hundreds of thousands of refugees without jobs, and that in a rich, but unequal country. This will have consequences both for the German economy and for politics. The internal criticism of the Chancellor will not cease. Merkel ended  up alone in 2015.

In 2016, we will see how the Chancellor reacts to the turning back by many European countries before the refugee crisis. Berlin wants more Europe. But Europe is not anyone’s thing. First Merkel will have to reassure and convince her people that the immigration policy is not only correct but viable. She will have to convince her European partners that there is no future for a dignified Europe if there is no distribution of refugees. It is the biggest challenge since reunification in 1990, according to Merkel. And an opportunity for the future of Germany. The Chancellor insists that Germany can do it because it is a strong country.