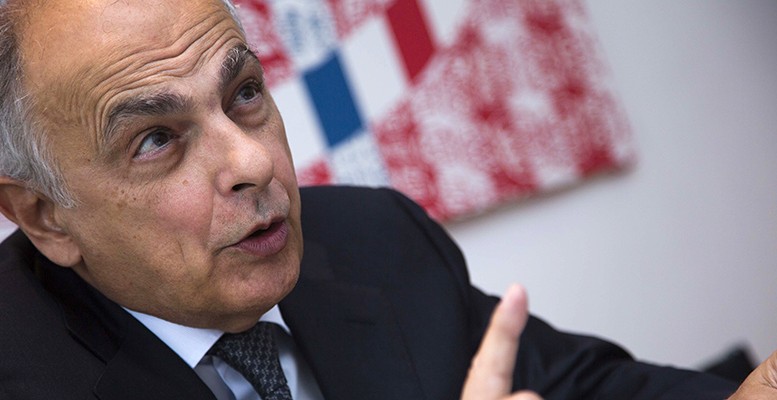 Luis Carlos Croissier is a member of the board of Repsol, Spain’s biggest oil company. He recalls that proven global oil reserves are currently double the level they were in 1980. Croissier was also chairman of the CNMV, the stock exchange regulatory body, and responsible for the Spanish bourse’s “Big Bang”, at the end of 80’s. Before that time, he was Industry Minister in Spain’s Socialist party.

Question: In 2006, we thought we were going to run out of oil.  But now it feels like we are swimming in the stuff. What has happened?

Answer: Yes, that’s true. The previous idea that oil was in scarce supply is no longer valid. Partly because proven global oil reserves are currently double the level they were in 1980. This is due to the fact that there are new systems for exploratory drilling and production in place across the world, including ‘shaleoil’ in the US, which is a real revolution. In just five years, since 2010, the US has managed to achieve annual crude production of 4.5 million barrels, equivalent to 5% of total global production.

Q: As a result, prices have dropped causing huge problems for the oil companies which are now being forced to cut production. Could they not have foreseen this situation?

A: No. This has happened before. Remember that we are talking about a sector which requires huge investments, with long maturity periods, taking between 5 and 10 years for successful drillings to reach production stage. It is true that companies tend to make their investment decisions based on price research, but it has been shown that prices in any market economy always fluctuate unexpectedly.

Q: What is the real impact of the fall in crude prices on the oil firms?

A: It is seriously affecting their income statement. They have had no option but to slash their investments, in some cases by as much as 30%. Given this drastic reduction – in both investments and production – it is to be hoped that we will see oil prices rise in a few years.

Q:  Do you really believe that Saudi Arabia has refused to cut production to harm the US’ ‘shaleoil’?

A: It seems that this time round Saudi’s strategy is about not cutting production to maintain its market share.  In contrast with previous occasions, Saudi Arabia has decided not to be the element of equilibrium between supply and demand.

Q: The drop in oil prices is good for Europe. But others say that it could be aggravating deflation…

A: I don’t think we have a deflation problem in Europe at present. But it is true that Europe is a net importer of oil products, so this decline in prices is proving to be a huge relief for the whole region.

Q: Why are the regasification plants in Spain not being used to diversify gas supply to the continent and not depend on Russia?

A: Spain is connected by pipe to north Africa and has 6 regasification plants. As a result, it has a lot of flexibility to bring gas, by boat, from any part of the world. Spain could be an alternative entry port, but for the time being this is not even on the cards. This is the situation. But firstly it would be necessary to increase the pipe connection with Europe which is still very limited.

Q: They say the French have refused to allow these interconnections.

A:I don’t know what the French stance is, but it’s true that the building of this type of infrastructure has always run up against major environmental problems. And not just in the case of gas, but also with electricity, which has suffered huge changes for this reason.

Q:  Chemical, petrochemical…Do you think they still have a future in Europe given the contamination element?

A: Depends on the type of chemical. I don’t like this kind of simplification..whether a sector will completely disappear..things like that. This doesn’t happen anywhere. No sector, not even the most traditional, completely disappears. For example, there’s textile and dressmaking, which continue, in spite of everything, and in fact are making a comeback. I believe there is a type of chemical product which has very little added value and will probably disappear, favouring the oil producing countries. And then there is another more sophisticated product which could play a role in Europe.

Q: Do you not think that environmental concerns are blocking this re-industrialisation which is so necessary?

A: We have a very serious problem, namely climate change, and the consequent commitment to reducing CO2 levels, which we cannot put aside. I don’t know if you have seen the recent report by the Bank of England warning that part of the mineral and combustible fossil resources may not even be extracted because of predicted CO2 emission limitations. And of course all this limits many activities. But furthermore,  the rise in the standard of living increases the demands made by populations. In China, an increase in the standard of living has been enough to multiply environmental requirements, also becoming a major political problem there.