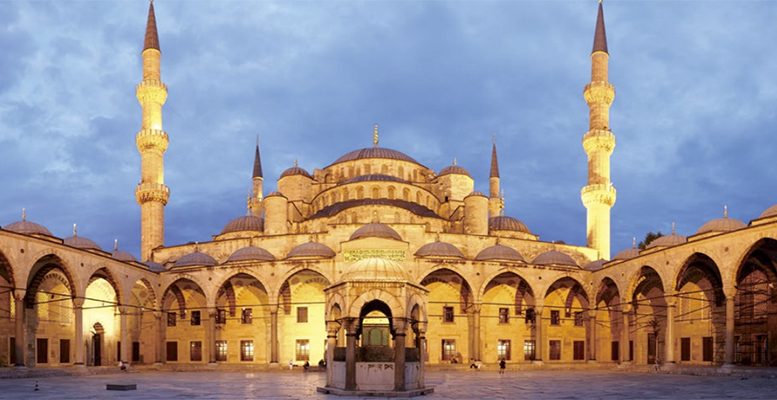 The Blue Mosque in Istanbul's echoes the glory of the all powerful ruler of the Silk Road.

Jens Bastian via Macropolis | This is the final of three articles in which the author analyzed China’s investment, lending and infrastructure initiatives in Southeast Europe for Macropolis.

The first contribution focused on China’s ‘Gateway to Europe’ via the Port of Piraeus in Greece. The second part looked at China’s emerging footprint in neighboring countries such as Serbia, FYR Macedonia and Bosnia-Herzegovina.

The final piece places China’s activities in the region in the wider strategic context of challenges for the European Union, multilateral lenders such as the EBRD and European Investment Bank as well as Russia.

China as a newcomer in southeast Europe:

China is rather a newcomer to the region of southeast Europe. Compared to other countries and multilateral institutions – such as Russia, the European Commission or the EBRD – China is starting almost 30 years after the Fall of the Berlin Wall to establish a footprint in the region. While Moscow, the Commission in Brussels and the EBRD in London have a long-established track record of activities and investments in the region, Beijing is only starting to focus on this part of the European continent in earnest since 2012.

But the arrival of Chinese investors, lenders and tourists in southeast Europe underscores a larger development in the region. Increasingly, southeast Europe is the focus of institutional and global actors who are establishing or expanding a sphere of influence in this region. Put otherwise, the region comprising Greece, the western Balkans and the Black Sea, some of which are EU and NATO members, others Candidate Countries is increasingly being crowded by countries such as Russia, Turkey, China and multi-lateral actors like the EU, EBRD, European Investment Bank, IMF, etc.

The expanding activities of China in Greece, Serbia, Macedonia, Albania, Montenegro, Bosnia and Herzegovina and Hungary pose challenges for EU Delegations, multilateral lenders such as the World Bank, the European Investment Bank and the EBRD as well as the Regional Cooperation Council (RCC) in Sarajevo. They must decide how to set strategic priorities and develop a cooperation framework with Chinese authorities and companies that are seeking to make acquisitions, provide lending or participate in public procurement tenders.

Overall, Chinese activities along the Balkan Silk Road are welcome by policy makers in the region. Despite visible inroads being made by Chinese companies, the countries’ main economic anchor remains – for the time being – with Europe. This anchor is by far still the region’s largest source of investment and development assistance.

Therefore, it is more appropriate to consider China as a complement to, rather than a substitute for the countries’ European partners. China is an additional source of funding and infrastructure modernization. But it is not yet a replacement for any of the countries in the region. However, China is in the process of building reputational capital to match its existing funding capacity in Southeast Europe.

The magnitude and complexity of the Balkan Silk Road project poses numerous policy challenges for countries engaging in or seeking to benefit from its implementation. These challenges are substantial, ranging from a critical assessment of the BRI’s objectives, the process of implementing these along the Balkan Silk Road, regulatory capacity building and the transparency of lending arrangements.

On a macro level, many of the Chinese-led infrastructure projects can improve economic productivity in the medium term, e.g. by reducing transport costs within and across countries. But it remains an open question to what degree these new transport links are financially viable medium- to long-term. Ports and energy pipelines appear easier to monetize than thermal power plants and road infrastructure or bridge building.

If many of these projects are designed primarily to transport and distribute Chinese goods to different locations in Europe, then the one-way traffic along new trade routes will hardly be cost effective. These emerging international supply chains would undoubtedly benefit more if they are operated on the basis of two-way traffic. [1]

Countries in Southeast Europe see in China the opportunity to provide them with the financial assistance to build highways, expand harbours and modernize utility facilities. The crucial element for governments in Southeast Europe is how to take control of their emerging relationship with Chinese counterparties?

The presence of institutional anchors such as the EBRD, EU delegations, the IMF, the RCC can assist them in navigating this relationship, e.g. in areas such as public procurement processes and safeguarding financial transparency. Guaranteeing regulatory fair play and compliance with EU environmental standards in the construction and operation of thermal power plants financed by Chinese banks is another area where policy dialog with international institutions will be key.

The Balkan Silk Road project is first and foremost about trade expansion. The existing 16+1 format focuses on the willingness of countries in Central, Eastern and Southeast Europe to expand trade cooperation with China. The surge of Chinese exports to most of these countries has further increased the trade deficit with China, in particular in Poland, Romania and Hungary.

Is there a risk of white elephants emerging?

A critical assessment of the Balkan Silk Road project cannot ignore the risks of creating investment and lending dependencies for countries in the region. Medium- to long-term growth perspectives in individual countries subject to the Balkan Silk Road project are at risk of excessive dependence on Chinese state-led investment, in particular state-owned and/or state-dominated companies providing concessional lending opportunities.

Many of these Chinese companies suffer from heavy indebtedness and export overcapacity. If Chinese authorities were to rein in lending practices to these companies, the potential spill-over effects to their subsidiaries in the Balkan region could be considerable in terms of curtailing existing investment plans, job creation commitments and SME development.

Moreover, to date the Chinese activities in the region are characterized by a sense of optimism, opportunity and make-do attitude. Infrastructure projects are being completed on time, giving rise to new ventures and initiatives. Building a critical mass of success stories linked to Chinese projects is an essential element of the Belt and Road Initiative.

So far, so good. But what if something goes wrong? What if a project fails? Could there be the threat of white elephants appearing in southeast Europe? These questions do not [yet] have any evidence on the ground in Greece, Serbia, the FYR Macedonia or Bosnia-Herzegovina. But there are various examples of such white elephants appearing in other countries on other continents.

An airport in Sri Lanka built with Chinese loans or railroad infrastructure built and financed by China in African countries are testimony that not every project completed is sustainable over time. The delay in starting to build the high-speed railway line between Budapest and Belgrade is not only a reflection of financing challenges or the recent investigation into procurement practices of the Hungarian government vis-à-vis Chinese companies. It is also an illustration that some of these proposed new infrastructure projects (including in Bosnia-Herzegovina) have to be evaluated if they are really needed, technically feasible and to what degree the financing conditions risk to create new levels of dependency for individual countries.

The more China establishes an investment and lending footprint in southeast Europe, the more it will come into contact with and reply to the presence of other countries who have a long-standing relationship with the region. Most obviously, this process implies crossing paths with Russia and its foothold in countries such as Serbia (energy sector) or in the ethnically Serb region, Republika Srpska, one of two sub-state entities in Bosnia and Herzegovina.

China and Russia are already expanding their commercial, banking and infrastructure cooperation. To illustrate, China is building railway links (e.g. Moscow – Kazan), providing lending to Russian banks and engaging in the construction of various deep-water ports in Russia’s Arctic region.

Of key importance in the consolidation of such cooperation arenas is the avoidance of project initiatives that could interfere between China’s BRI and Russia’s Eurasian Economic Union. While there is geographical overlap between both institutional arrangements, Beijing and Moscow have been careful to sidestep any suggestion of undermining each other’s initiatives with competing projects.

The Sino-Russia axis will also bear fruit the more both countries appear on an equal footing in the cooperation. Put otherwise, Moscow will want to avoid appearing as the junior partner in joint projects. But the reality on the ground rather suggests that the ambitious outreach and financial resources committed by the Beijing authorities for the implementation of the BRI will be difficult to match in Moscow. Astute economic diplomacy will have to paper over this structural difference in the coming years.

In conclusion, the transformative potential of the BRI along the Balkan Silk Road is taking shape. Trade by destination and origin will continue to shift towards China among countries in Southeast Europe. Meanwhile, the region will further diversify its sources of capital, i.e. through Chinese lending and increasing equity investments. One of the major drivers of this process in the coming years will be increasing numbers of tourists arriving from China and traveling through southeast Europe.

The groundwork for this expansion, i.e. port, rail and road infrastructure is being established. Access to cheap Chinese consumer goods, from clothing to mopeds and mobile phones will grow in the region. China and the countries in southeast Europe are creating a track record of cooperation, learning to work with each other. China is a newcomer to the region, but firmly in play in the coming years.