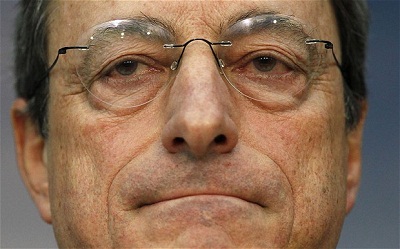 MADRID | The European Central Bank has entrenched itself in its own territory, delivering a conventional rate cut to address a downsize risk in economic perspectives. Output hovering around zero growth in Europe will drive inflation below targets, thus triggering the need to introduce some potential stimulus. But Draghi watered down Thursday’s rate decision, warning on the limited scope of lower rates when financial markets are so fragmented, risk perception so acute and credit demand so low. If there reasons to be concerned he deliberately contributed to fuel pessimism.

By delivering an orthodox answer, the ECB dashed market expectations it might provide temporary support till the summit package is implemented. No medium term facility, no intervention to soothe sovereign tensions. In short, it acted as if the summit has never taken place. Draghi’s words of praise for the results achieved sounded rather hollow. No wonder the markets immediately showed their deep disappointment.

Refraining from taking unconventional and aggressive measures does not seem to merely reflect the ECB reluctance to avoid interfering with a euro defence strategy, whose design is a matter for governments and other community institutions. It mirrors Berlin’s firm stance to preserve monetary policy as it stands now, avoiding any attempt to use the ECB coffers to finance either deficits or bank failures. Keeping

get your ex girlfriend back

to orthodoxy sends the message than the rescue funds will be limited and support subject to strict conditionality. It also warns on the fact there will be no free-lunch policy.

Is it reasonable to behave as if problems were confined to (German) economy losing steam? Aren’t we exposed to a highly volatile scenario in the coming months, Spain gradually suffering from stiff attacks as prospects to quickly implement the Summit package fade away? The ECB has failed to address these pressing issues by discarding any hope it might step in shoring up the euro’s ailments with its full fire power. Its obvious lack of will to act now will bolster speculation against weaker members of the club. Stepping in when things spin out of control will fail to redress confidence and might involve throwing away higher amounts of money in exchange for limited results.

The ECB has wasted a unique opportunity to shore up the euro during an interim period that might last longer than expected. By drifting away from the Summit spirit it has dealt a blow to the painfully structured way out to current problems and shortcomings.

Spain could become the obvious target. Early this week the ECB has alleviated its credit crunch risk by enlarging the scope of collaterals. But at the same time it has frozen the amount of domestic sovereigns to serve as collaterals thus thrashing banks’ ability to absorb Treasury issuance. A bad omen when financial needs up to end of this year run so high. The ECB restrained attitude will not help to bridge the gap. In a way, we are sent back to step one.