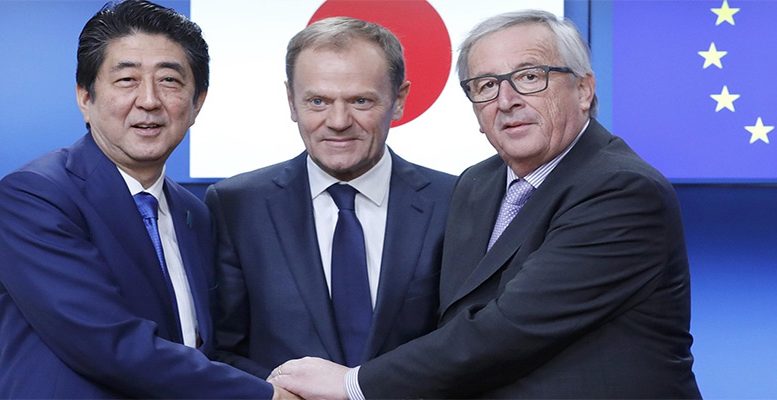 Japan’s Prime Minister Shinzo Abe signed on Thursday a political agreement on the EU-Japan trade deal, which would be likely completed within months.

The EU and Japan will have to continue working closely to finalise a trade deal by January. Officials said it was not clear at this stage how the EU-Japan deal would be ratified in Europe. Full national ratification gives every national parliament and some regional ones a veto. This process was used to ratify the EU-Canada trade agreement, which was nearly derailed by a Belgian regional parliament vote in Wallonia.

The fact that European and Japanese authorities have announced this significant trade agreement on the eve of the G20 summit in Hamburg, Germany, “can be seen as  strong signal against Donald Trump, who is expected to press his case for protectionism in the forum”, pointed Nick Ottens via Atlantic Sentinel.

Citi’s analysts agree that stance on the deal:

“It is framed as a direct rejection of the protectionist rhetoric coming from the United States.”

PM Abe told ministers, “it is important for us to wave the flag of free trade in response to global moves toward protectionism by quickly concluding the free-trade agreement with Europe”.Similarly, a senior EU official is quoted in Politico as saying that the deal “was probably helped by what we both see as a deterioration of the international climate” in terms of trade and investment.

The political agreement covers over 90% of the issues under discussion for a trade agreement. This includes removing tariffs from 99% of goods traded between the EU and Japan, although in some cases there will be lengthy transition periods of a decade or more. The EU and Japan have also agreed to open up their public procurement markets to each other and to remove some non-tariff barriers to trade.

One key success for the EU is winning access to the Japanese markets for its farmers. For Japan, a key motivating factor has been the agreement from the EU to remove barriers to imports of cars. Some sensitive issues are still open. Data flows have been left out with Brussels and Tokyo close to striking a separate agreement on ‘data adequacy’, which would mean EU data can be transferred to Japan as the country upholds the same protection standards as the EU.

The deal also leaves out controversial investor protection court systems. EU officials say that they will try to finalise the accord by January 2018.

However, interestingly one poll published in Handelsblatt showed support for globalisation in Germany increasing from 50% to 63% within the first six months of the year. Although this is only one poll conducted in one country, the populist tide seems to have been turning in Europe this year with mainstream wins in key elections. The timing of the EU-Japan political agreement is significant with the G20 summit on Friday and Saturday, sending a clear signal of defiance to President Trump’s protectionist rhetoric.