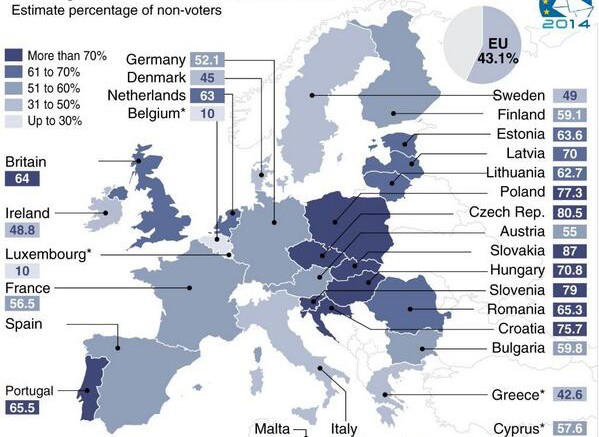 In Spain, the government’s Popular Party won the elections, while the socialists remained as the second political force. However, their hegemony was wiped off the map after the outbreak of parties coming from social movements, Julia Pastor reports from Madrid.

We can (Podemos in its Spanish name) or Citizens-Party of Citizenship (Ciudadanos-Partido de la Ciudadania) became the real winners of 2014’s European elections in Spain, especially the first one which have turned into the fourth force in the country collecting more than 1.2 million votes (near 8% of the total) in their first polls. Results will be translated into 5 seats in the new Euro Parliament, presumably governed by conservative Jean-Claude Juncker.

We Can was born just four months ago, but it has been time enough to raise the votes of discontented with austerity policies and the consequent increasing social inequality. The political formation directly comes from the Indignados (outraged) movement, the so-called 15-M that occupied Spain’s public squares for months 2 years ago.

The young group’s leader Pablo Iglesias, a new face in the Spanish political arena, said later on Sunday his party’s victory was “the victory of citizens’ voice”, and the defeat of those representing “an old regime.” Iglesias also has reasons to celebrate Syriza’s triumph in Greece, as their similar social foundations make them a sort of twin parties. In fact, the Spanish head of We Can may have a telephone conversation with his Greek counterpart Alexis Tsipras after celebrations.

And while new and little formations opened the champagne, the two big parties’ headquarters closed their doors and turned off their lights in Madrid slightly after midnight. It was the pure reflection of sadness, the effect of the severe punishment received from voters. The Popular Party as well as the Socialist Party were the most voted in the polls, but they lost 8 and 9 seats compared to the last European elections, which meant five million votes. It is the first the sum of both parties does not even reach   50% (against 73% of last polls).

According to Spain’s political analysts, this is a hard setback to traditional Spanish bipartisanship, a clear and loud ‘no’ from citizens to austerity measures, and also to the political groups’ apparatuses and their way of doing politics. The Popular Party won 16 seats, followed by socialists with 14. Socialist candidate Elena Valenciano, visibly disappointed, reckoned their results were “bad”, while governing party’s Miguel Arias Cañete underlined their satisfaction for their victory.

Abstention in Spain was near 50%, while in Portugal reached more than 70%, the highest in the country’s democratic history. However, the saddest for that old continent of Europe aspiring to be a new and stronger project was French National Front’s victory, accompanied by eurosceptics in Denmark, Austria and Finland, and the British nationalist party UKIP.

As for Germany, Angela Merkel also paid the price of being the face of austerity measures. Three topics are pointed out by the media, The Corner’s Alberto Lozano reports from Berlin: the rise by 6.5% of the Social Democratic Party (SPD) compared to the 2009 elections thanks to the ‘Schulz effect’; the appearance of ‘Alternative für Deutschland’ (AfD), a new eurosceptic party winning 7% of the votes and 7 of the country’s 96 seats in the EU Parliament; and the collapse of the Liberals (FDP). Nevertheless, Angela Merkel’s party (CDU) keeps the largest share of votes (35.5%), but down compared to the last EU election due to the poor results of its Bavarian sister Party (CSU).

Be the first to comment on "European Elections: the dangerous rise of europhobia, disappointment and disaffection"