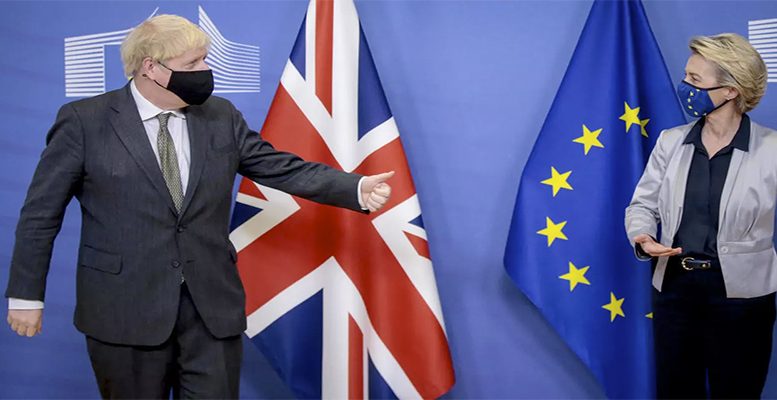 After 47 years of membership in the EU and 1,645 days since the British citizens voted their way out, finally early in the afternoon of the 24th, negotiators Michel Barnier and David Frost reported on the agreement on the conditions of exit and their future relationship.

The 1,246 pages of the agreement that regulates the new commercial operations between the UK and the EU, which amount to approximately €900 billion annually, is based on three basic pillars: 1) Free trade agreement on goods, without tariffs or quotas, and very reduced in services. There will probably be attempts to expand this in the future. Similarly, the fishing rights of the European fleet in British waters are established, which will have to be reduced by 25% over the next five years. This was one of the most controversial issues during the negotiations. Finally, the conditions for maintaining balanced competitive conditions were agreed upon. In addition, there is a dispute resolution mechanism allowing both parties to remove trade preference if an independent panel finds one party has engaged in anti-competitive practices; 2) Cooperation on aviation and road transport, as well as on security where important cooperation with Europol and Eurojust on police and judicial matters is agreed; 3) Agreement on governance, giving the maximum possible legal certainty to businesses, consumers and citizens in general. A joint council will be established to monitor the implementation of the agreement, allowing retaliation in case of violations of the agreement, without any role for the European Court of Justice.

This last minute agreement avoids one of the biggest risks facing the Eurozone stock markets in recent years. For Link Securities analysts:

“The possibility of a hard Brexit would have had a very negative impact on the economies of the region, increased at this time by the deep crisis caused by the pandemic. This must have been a key issue for politicians on both sides in choosing to be prudent and close a minimum agreement.”

“However, as happens in these completely bureaucratised societies, we are convinced both parties will force specific changes to the agreement. This will generate tensions in the markets. So we expect that in the future Brexit will continue to cause agitation, but of lesser intensity.”

On the basis of the agreement, the key points are:

Financial services: The agreement does not cover this chapter so the City of London loses the passport that allows it to operate throughout the EU with privileged access.

Travel: The continuity of air, road and maritime connectivity is ensured. British airlines will no longer be able to operate intra-European commercial flights, although they will be able to maintain the routes linked to the UK with destinations in the EU. The UK will determine whether EU citizens visiting the country for short stays need a visa. Short term travellers from the UK can visit the block for 90 days in any 180 day period. Tourists are covered by a mutual health care scheme in case of emergency.

Environment: There is also a broad agreement in the energy field – cooperation in connectivity and a collaboration framework in renewables and climate change. That said, the UK will no longer be a member of the European programme of nuclear energy EuroAtom.

Subsidies: Both trading partners will have their own independent rules on subsidies.

Northern Ireland: In order to avoid a harsh border with EU member Ireland, Northern Ireland will maintain many EU rules when it leaves the single market. No controls on the Irish border.

Erasmus: The UK will not participate in the Erasmus student exchange programme nor has a framework for cooperation in foreign policy or defence been agreed.

In the opinion of Banca March’s analysis team, the agreement reached by the negotiators is not as ambitious as the European Union intended:

“It also reflects Boris Johnson’s mood. He opted to significantly reduce the scope of the relationship with Brussels after the consummation of Brexit on January 31 and the end of the transitional period of departure next Thursday. In any case it will be a very important pact, by which the UK will continue trading freely with the EU, as it has done up to now, without tariffs and without quotas. And a chaotic Brexit is avoided after more than four years of negotiations.”

Bankinter’s experts also believe that “the best thing is there is already an agreement”, although “it is vague in many aspects and there are issues to be clarified in the future.”

“The UK and Europe are proposing free trade rules in a spirit of equality and transparency. We recall that the Spanish stocks with the greatest exposure to the UK are Santander, IAG, Telefónica and Sabadell”.

Regarding the agreement, European Commission President, Ursula von der Leyen, said that it had been a long and tortuous road. However, it is a fair and balanced agreement and is the right and responsible thing for both parties. She added that the EU and the UK will work hand in hand to meet the common goals. For his part, British Prime Minister Boris Johnson said the agreement marks a end to the uncertainty that has plagued UK politics for years, now putting its economy on a better foundation to recover from the pandemic. In this respect, he said the agreement, above all, means certainty. The German and French governments also welcomed the agreement, a sign that the two largest EU economies are likely to support it when leaders formally sign.

In fact, the deal must now be formally ratified by the European and UK parliaments and signed by EU leaders before year-end. EU governments have been insisting that they need adequate time to review the text before approving it. EU legislators have also said it is now too late to meet before the end of the year, so they propose the provisional application of the agreement until February 28 while final approval is processed. Approval is taken for granted in Westminster where the Conservative Party has a large majority and the Labour Party has already announced its support.

Now the time has come. At the end of the year, the UK will formally leave both the EU’s single market, its common regulatory area, and the customs union.