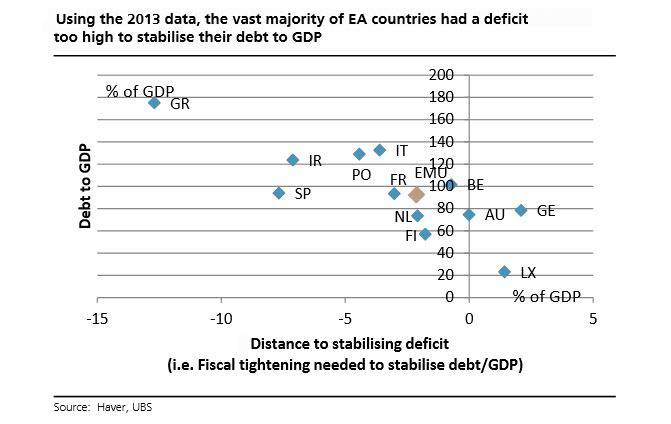 At the end of 2012 UBS took a positive view on European peripheral spreads based on two arguments:

“the risk premium commanded by peripheral Europe is unduly low compared to the rest of the world. And indeed we show that peripheral Europe now behave increasingly like risk free rates. The compression has gone too far. The fundamental argument is losing steam: true, the external imbalance (aka current account) is still valid, but the internal imbalances (aka budget deficit) are far from solved, the medium term sustainability of public finance is still highly questionable and our leading indicator suggests that the public deficit could widen this year for the first time since 2009. Progresses have been very slow and the recent data point increased our worries.”

Taking the data from the OECD, UBS has actually obtained three different groups of countries in the EZ:

Countries with unsustainable trajectory because the deficit is still too high even with growth back at trend. The countries in this group are France, Ireland, Spain and Greece.

Countries with a deficit slightly lower than the stabilizing one, hence a sustainable public situation as the debt to GDP ratio would be going down, albeit at a pedestrian rhythm. This group includes Belgium, Finland, Portugal and Italy.

Countries  which have achieved fiscal adjustment and have secured a healthy decline in debt to GDP. These are Germany, Netherlands, Austria and Luxembourg.”