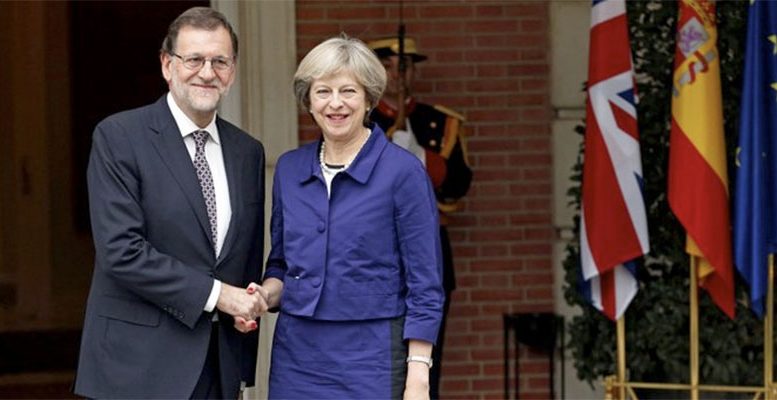 PM May visiting Madrid in October 2016

The legion of well-versed journalists, columnists, economists, analysts and commentators love to predict catastophres. Issue a warning to the reckless. These include Brexit which everyone said was going to cause an earthquake in Europe, not just in the UK but also on the rest of the continent.

Well for the time being, nothing major seems to have happened. The pound has depreciated 10% which may have affected our exports to the UK over the last year. But at the same time, there is no doubt it has been positive for that country’s economy. Its exports have been increasing, offsetting other internal uncertainties and helping maintain growth rates and unemployment at fairly healthy levels. In fact, UK GDP grew 0.2% in the first quarter and 2% year-on-year, which isn’t at all bad taking into account the previous predictions.

It’s possible that things will begin to change – which they are – but for the moment they have gone notably well. All the indicators show that 2016 has not only not been a bad year, but has been one of the best in terms of bilateral Spanish-UK economic relations. Spanish exports reached record highs, despite the pound’s depreciation. Spain exported 19 billion euros and had a trade surplus of 7.968 billion. And the Brits have still been coming to Spain on holiday. No less than 17 million, one out of every four, were over here!

Of course it would be daring to say that the decision taken by the British people in the summer of last year has not had any consequences for our companies over there, like Santander, Ferrovial, Iberdrola, Telefonica and FCC. These firms’ profit and loss accouts have logically been affected by the devaluation of the pound and have declined significantly. The contribution from Santander’s UK business to group net profit dropped 14.7% in 2016. But this is a one-off effect, and that’s it. If the pound remains at current levels, their results will start to rise again.

It would have to be said that, despite the fact the Spanish multinationals in the UK have said they will be cautious – this is de rigueur, they owe it to shareholders – they have not shown the slightest intention of reducing their investments in the country. The UK is the number two destination for Spanish investment abroad and there doesn’t seem to be any plan to collect on this bet. Our companies have a 60 billion euros stock of investments in the country.

Iberdrola chairman Ignacio Sánchez Galán has assured the company will continue to invest in Scottish Power and in the numerous projects underway in the UK. Ana Botin, who headed up Santander’s business in the UK (23% of total group net profit) before taking over from her father, stated she remains “as committed as always” to this market. The same goes for Sabadell chairman Josep Oliu. He repeated his colleagues message: a risk in the short term, yes, but the trend will be positive in the medium and long-term.

Also we musn’t forget that a weaker pound implies potentially cheaper investments for Spanish companies in the UK.

So are Spanish firms wary of Brexit? According to various studies and surveys, they are afraid, but the truth is that they don’t appear to be losing any sleep over it. The reality is that, whatever they say in Brussels – and in Paris and Berlin – we all asume that the rivers won’t run with blood.

The problem is not so much Brexit in itself but in a Brexit which will leave the UK at the foot of the horses, with its relations with Europe blocked, broken, subject to high tariffs, etc. This can’t happen. Not because it would damage UK companies, but also because it would have an impact on ours.

Relations at the production chain level in all the big companies, from aeronautics to automotive, are so interwoven that any blockade would have an impact on the business of all the big firms in Europe, from Spain to Germany or Holland. Thus in Brussels – and in Paris and Berlin – they are going to have to sheathe their resentment and come up with imaginative solutions so that the UK’s “scare” doesn’t turn into a big drama for everyone. A stupid drama which we should avoid and the big companies have very clear they will do just that. That’s maybe why they are not losing too much sleep over Brexit.