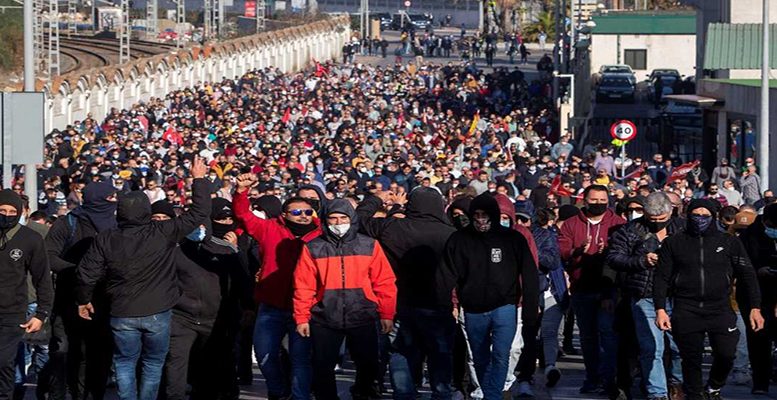 The Government is facing a ‘hot’ end of the year in the face of demands being made by economic sectors as important to the Spanish economy as the countryside, the automotive industry and transport. They have already announced demonstrations in response to the problems their respective activities are going through. The Spanish economy is recovering the momentum it lost with the arrival of the pandemic. However, the global supply crisis and the high cost of raw materials and logistical transport, together with soaring fuel prices and electricity that is more expensive than ever, have caused a kind of ‘perfect storm’ in sectors such as the automotive industry, is being forced to stop production intermittently due to the shortage of semiconductors. This in turn is causing problems for car sales, with dealerships running out of stock and delays in vehicle deliveries. The average delivery period is already stretching between six and eight months, according to Europa Press.

According to data from the associations of manufacturers (Anfac), dealers (Faconauto) and sellers (Ganvam), car registrations in Spain reached 59,044 units in October, 20.5% less than a year earlier. Meanwhile, the sale of used vehicles of high age is soaring.

The situation of the sector and the “inaction” of the government have led the CCOO to call for tomorrow, 22 November, a rally in front of the Ministry of Industry, Trade and Tourism, for which it will bring twenty buses with workers from all the autonomous communities. What the workers are asking the government to do is to act firmly in the face of the changes that are affecting a sector that generates 10% of GDP and more than half a million jobs. While what has been called ‘the perfect storm of the car’ lasts, CCOO is demanding that temporary lay-offs (ERTE) can be activated in those companies that commit to maintaining all jobs.

THE COUNTRYSIDE, ON A ‘WAR FOOTING’

The countryside is also on a ‘war footing’. The professional agricultural organisations Asaja, COAG and UPA have already announced a “big mobilisations process” at national level, without ruling out “a major demonstration” in Madrid. Although they have not yet given dates, they have advanced that they will be held in many parts of the country during the month of December. And some of them will coincide with those of the hauliers, who have announced a lockout a few days before Christmas.

These mobilisations will be carried out in the face of production costs that have shot up for farmers and stockbreeders to levels “never seen before”. Livestock feed has risen by nearly 30% in the last year and seeds are also more expensive (+20%), fertilisers (+48%), water (+33%) and plastics used in greenhouse crops (+46%). The “most spectacular” rises, according to the agricultural organisations, are those affecting the diesel used by their tractors (+73%) and electricity (+270%), to which must be added the Minimum Interprofessional Wage (SMI), which has risen by 29.7% in the last three years. Farmers and stockbreeders denounce the fact that food is becoming more expensive for consumers while they are still not covering their costs.

For the moment, these organisations have already launched a national process of mobilisation in the dairy sector to demand fair prices. They denounce the fact that multiple costs they have to face to look after their cows and produce milk have shot up. So the price they obtain for milk does not allow them to obtain “the minimum profitability necessary to continue”. The farming organisations have flagged the fact there is a massive closure of dairy farms in Spain, with 6,000 farmers having closed in six years and now just over 11,500 remaining.

The road haulage industry has also prepared a ‘hot winter’ for the Government if nothing is done about it. The National Road Transport Committee (CNTC) has declared two days of lockouts before Christmas because of the “state of abandonment by the government”. The closures will last 24 hours and will take place between 20 and 22 December inclusive. “Only a radical and urgent change on the part of the government and customers could avoid this conflict,” the CNTC’s Freight department said a few days ago.

The body criticises the ban on drivers loading and unloading lorries and calls for the non-implementation of the Eurovignette and the mandatory application of the fuel cost review clause. This week the price of fuels has chained its eleventh consecutive rise, reaching new annual highs and approaching its highest figures in the historical series. Specifically, the average price of petrol has climbed this week to 1.513 euros per litre, its highest level since September 2012 and very close to the historical maximum of 1.522 euros it reached on the same dates. For its part, the average price of a litre of diesel, which also adds its eleventh consecutive rise, this week stood at 1.385 euros, its highest level since end-October 2012. With this new hike in fuel prices, filling up this week is 32.5% more expensive than a year ago in the case of petrol and 36.6% higher in the case of diesel.

The problems in the car industry, the countryside and transport are not the only labour disputes the country is experiencing and will experience in this final stretch of the year. Aside from the government, in the financial sector there are protests against the redundancies announced in institutions such as Banco Sabadell and Unicaja. Meanwhile, in the industrial sector an indefinite strike has begun this week in the metal industry in the province of Cadiz, which employs more than 20,000 workers. The focus of the conflict, which has provoked some disturbances in the streets of Cadiz, is centred on the renewal of the collective bargaining agreement, which has been in force since December last year. The unions are demanding a 2-3% wage increase and a reduction of four hours of work per year. Employers have opposed this, claiming it would lead to “the disappearance of the industry” in Cadiz.