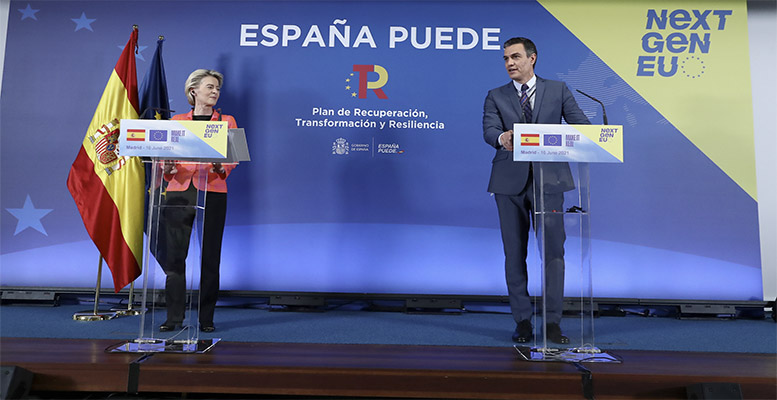 After visiting Lisbon for the same purpose, Ursula von der Leyen travelled to Madrid and met with Spanish Prime Minister Pedro Sánchez to personally inform him of the green light for the Spanish recovery plan, submitted to Brussels in April. This approval will allow Spain to receive as early as next month, after Ecofin’s approval, 9 billion euros as an advance on the 69.5 billion requested. (The rest of the NGEU funds allocated to Spain, up to 140 billion euros, are loans and have not been considered for the time being).

According to Brussels’ calculations, Spain should receive another 10 billion euros before end-2021, although this delivery will be subject to the fulfilment of almost fifty objectives. After that, Spain will be able to release new tranches every six months, as it meets a series of targets agreed with the European Commission. In the end, the disbursement of the non-refundable 69.5 billion euros for Spain depends on 416 objectives that Spain will have to meet over the next few years.

Some of these objectives have already been met, since the reform programme includes measures adopted since February 2020. But such important issues as reducing the temporary nature of the public sector, the coming into force of the climate law or the deployment of electric car charging points are still pending.

The amount finally approved for delivery this year is much lower than the 27 billion euros the government expected to receive when it drew up the General Budget. But according to Sánchez, this will not be a major problem and “is perfectly acceptable for the Spanish government.”

The largest disbursement is scheduled for June 2022, for 12 billion euros, but for this the government will have to have made a lot of progress in labour market reforms. There would then be a further payment of 6 billion euros at end-2022, another of 10 billion in mid-2023, 7 billion in December of that year, 8 billion in mid-2024, 3 billion a year later and 4 billion in June 2025.

The European Commission highlights that the Spanish recovery plan allocates two thirds of the funds, 68%, to reforms and programmes related to energy transition and digital transformation.

“The Commission considers that Spain’s plan includes a wide range of mutually reinforcing reforms and investments which contribute to tackling or significantly reducing the economic and social challenges highlighted in the Spain-specific recommendations.

“This plan will profoundly transform Spain’s economy, make it greener, more digital and more resilient. We have supported this plan because it is ambitious, forward-looking and will help build a better future for Spaniards,” explained European Commission President Ursula von der Leyen.