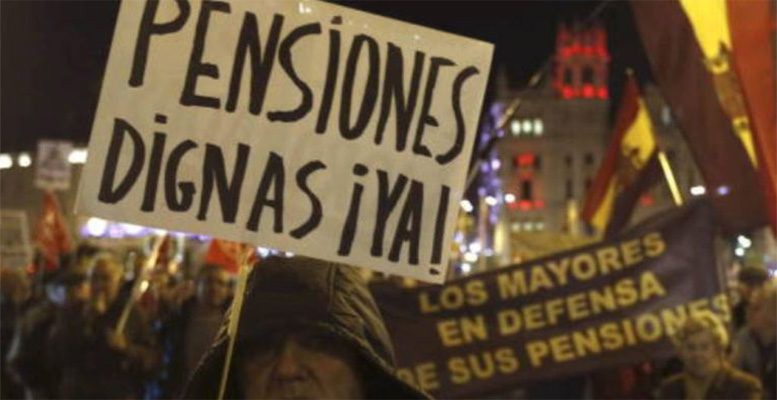 Spain’s pensioners are on the brink of war. The group which has been the support for families during the 10 years of crisis, and has saved the country from social conflict, received a letter from the Labour Minister, Fátima Bañez, at the beginning of the year. She said that despite the fact CPI is now over 1.5%, she was maintaining the 0.25% increase in the pensions. The trade unions have described the rise as “ridiculous” and even “a shit increase”, and have managed to encourage the pensioners out on to the streets twice, in different demonstrations, something unheard of before.

Now pensioners are asking for an increase in their pensions, when they are the only social group which gained purchasing power during the crisis. In fact, the income of a household headed by someone of 65 or over was more than 10% higher in 2014 than in 2008. On the other hand, in the rest of the households, the decline was between 14% and 28%.

This is so true that every day that passes the government is having a tougher time paying pensions. At the end of last year, it had to use a new 1o billion euros state loan to the Social Security. For the July extra payment, the government already authorised the payment of 5.986 billion euros charged against that state loan to the Social Security, approved in the 2017 budget. In June, it used 3.514 billion euros from the Reserve Fund to make up the summer extra payment.

In short, the “pensions pot” is at minimum levels; for future pensioners, the future is bleak…That said, there are experts who say there is indeed money to increase pensions or, more exactly, to “create money”.

That said, senior analyst Miguel Navascués is not in favour of those who in general “prefer after the fact, or the lie, or propaganda, people who have miracle solutions.” The following are Navascués comments:

“The school called Chartalism or Modern Market Theory, starts from the basis that the state can create money when it wants. At the moment, I won’t argue this point, but will elaborate on it later.”

“What I don’t know is who can believe in a world without limitations, a world where the Three Kings come every day or, even better, they rule it. It’s as easy as that: the government and the Central Bank are both members of the State. And nothing is stopping the government from issuing debt, it places it with the Central Bank, and with the money it gets it pays the pensions it wants. Naturally, and they acknowledge this, there is a risk – only one they say – of inflation if this mechanism is abused, so the only thing to keep an eye on is inflation.”

“Let’s suppose that it is not abused and, therefore, there is no inflation. But is there not a problem of the wrong assignation of resources? Because either all the demands of the pressure groups are attended to and there is inflation, or some from those groups with more notable electoral value and more social support, like pensioners, to the detriment of the rest.”

“In fact, after obtaining an upward revision to their pensions which is more generous than for the others, as can be seen in the graphic, although there is no inflation (the complete opposite), there has been a 10% deviation towards one group compared with the other. Is this not an arbitrary assignation of recourses, even more so when the future of pensions looks increasingly blacker. Pensions represent a future debt which will not be able to be paid – if it’s not via the Chartalists’ magic potion. This leads us to the fact that the current distribution favouring some and not favouring others represents a distortion of the future debt.”

In summary, for Navascués Chartalists are making structural error. If they do the same with all the groups, inflation will rise. If they do it with just some groups, it will be unfair. Apart from other technical considerations which he doesn’t want to get into.

“So what the Chartalists propose only serves in the case of deflation which is best fought in a way that doesn’t reassign resources between groups. It’s nothing other than Milton Friedman’s Helicopter Money proposal, which is a metaphor for how to increase the money in circulation proportionately for everyone. If they do it to “compensate” some people – pensioners – compared to others, we have seen that pensioners have been much more compensated than others. Perhaps deservedly? Well maybe, but it seems that in any case they are not satisfied.”

“Pensions are one of Spain’s most serious problems. And it’s a problem which gets worse each year, on a very long time horizon. The bad thing is that I fear neither the pensioners not the workers understand it well, nor understand how few solutions there are. It should be said that the solutions need to involve an increase in savings on the part of the workers, with the guarantee that there is in other countries that it is not money thrown away but money saved. There is no solution other than that workers stop paying today’s pensions, which is the current system. But who is going to explain to them what the “Austrian bagpack” is, for example, or other alternatives?”