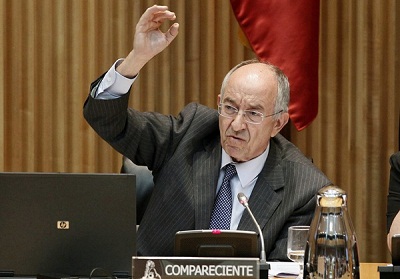 He accused the government of leaving aside the Bank of Spain in handling the banking restructuring, taking all responsibility for the ensuing discomfiture. Bankia’s crisis mismanagement was hailed as an utter fiasco leading the whole financial system into the current disarray. Not to mention its knock-out effect on Spanish credibility and the rough waters its economy is confronted to. He was not the first to point out that blunder, Draghi preceding him in depicting such mishandling.

But the former Bank of Spain governor provided some further saucy details. He unveiled an agreement reached with the ousted Bankia’s chairman involving the appointment of a new executive director and addressing the entity’s imbalance by half the amount the government is ready to inject. Final figures to be drawn up by an independent audit paid by government will most likely endorse its initial forecast. Yet, Mr Ordoñez’s delivery will undoubtedly cast a doubt on the soundness in spending as much as €23 billion of taxpayers’ money.

He also depicted the dismissal of Bankia’s chairman as a clumsy blunder, opening-up a crisis that has fuelled into a deep confidence gap throttling the Spanish economy. Even if he did not point to political reasons for such a harsh move, he left members of Parliament wondering about the “raison d’État” behind a dismissal that averted any temptation Mr Rato might have to become the Spanish Monti.

His masterful performance also skipped any responsibility for the financial bubble, refraining from any comment on errors committed before he took office in 2006. He invited members of Parliament to address such issues to his predecessor, appointed by the party now in power, in stark contrast with current governor open indictment of Mr Ordoñez’s governance.

He staunchly defended his record emphasising success in transforming ailing and frail saving entities into full banks. He only conceded the process to have been too long, blaming political interference and the inner difficulty of performing such complex mergers for the delay in implementing the strategy.

Mr Ordoñez’s unsparing appraisal of the crisis management and his exposure of Mr Rato’s dismissal will undoubtedly provide ammunition for those half-heartedly supporting the government and the way it is managing the crisis.