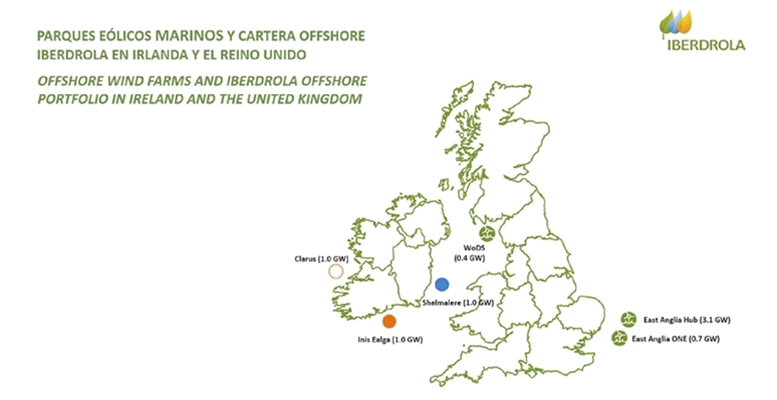 Iberdrola has added to its offshore wind ambitions, with entry into the market in Ireland, as the company seeks to expand its global renewable energy footprint.

The agreement will see Iberdrola acquire a majority stake in DP Energy’s offshore wind pipeline in Ireland, which totals 3 gigawatts (GW). The projects are located in three clusters on the east, west and south coasts of the country, of which some will be eligible for the forthcoming offshore auctions in 2025-2030.

The agreement also includes Iberdrola acquiring a majority stake in the company created by DP Energy, that will be responsible for developing this wind pipeline in Ireland.

The projects included in the agreement are the Inis Ealga wind farm on the south coast of Co Cork and the Clarus project on the west coast of Co Clare, both to be developed with floating offshore wind technology. Additionally, the Shelmalere project will be located off the east coast and will be developed using fixed foundations. Once operational, the projects will generate enough green energy to power the equivalent of 2.6 million households in Ireland.

Positioning in markets with growth potential

The transaction allows Iberdrola to further enhance its geographic diversification, as the company continues with its strategy to grow in markets with a favourable investment environment. The deal also allows Iberdrola to position itself in the initial stages of Ireland’s offshore wind market, which has considerable growth potential in the years ahead.

Ireland has ambitious climate change mitigation policies in place to transform its energy mix, with Government planning to have 5 GW of offshore wind capacity operational by 2030. Estimates suggest there could be up to 40 GW of potential for offshore development.

Iberdrola’s partner, DP Energy, is an international developer headquartered in Cork with extensive experience in the renewables industry and strong knowledge of the Irish market. DP Energy is also working with Iberdrola currently in Australia, to develop the Port Augusta Renewable Energy Park, a 317 MW hybrid wind and solar project in South Australia.

This agreement in Ireland fits with Iberdrola’s strategy to consolidate its position as the world’s largest renewable energy company and builds on previous transactions and investments in offshore wind carried out by the company in recent years.

More recently, Iberdrola has taken access to early-stage capacity of 9 GW in Sweden, more than 3 GW in Japan and up to 7.3 GW in Poland. In Denmark, Iberdrola is also working with Total on an auction process for the Thor offshore windfarm, which could have a capacity of up to 1GW.

This latest transaction brings the company’s pipeline of offshore wind projects worldwide to more than 30 GW.